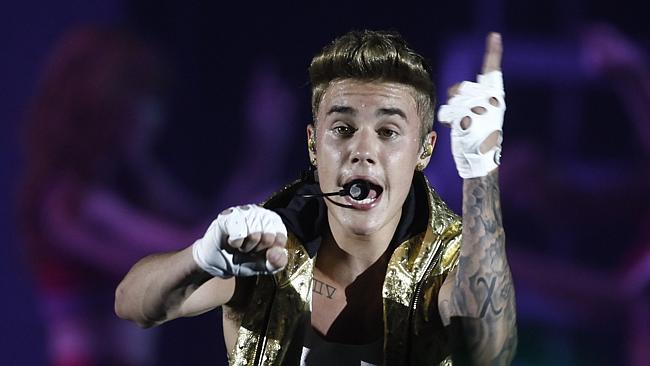 POP brat Justin Bieber verbally abused a woman in Perth by calling her a “beached whale,” according to a guest at the hotel where Bieber was staying.

Bieber and his entourage were on the pool deck at Perth’s Hyatt Regency hotel on Sunday.

“There were four young girls in bikinis,” Robinett said.

“One girl who was gorgeous looking, with long dark hair and would have been about a size 14. Justin looked over at her and said ‘What are you, Hawaiian or something?’ She said `No, I’m not’. Then he said ‘You look like a beached whale’ … The girl said ‘Are you serious’ and he said ‘You should go on The Biggest Loser.’ … The whole pool deck heard him call this beautiful young girl a beached whale. Everyone heard. And there was silence. It was almost like his security were used to it.”

Robinett, who works in Melbourne as an image consultant and was in Perth on business, said the girl looked “deflated” after the abuse.

Robinett’s daughter, Gabrielle Blair, 21, said the girl was “almost in tears” after the exchange.

“The girl and her friends left the pool deck after that,” Robinett said. “I looked at her and said “on’t you take that on. That has nothing to do with you.’ I made a complaint to the hotel, and they said the girl was OK and she was a Bieber fan. She may appear OK, but I work in styling and fashion, I know how women view their bodies, what body image issues women have.

“That kind of comment can have a serious impact and repercussion. That’s why I’m so upset about it. I’m bloody angry. He’s nothing without his fan base.

And he’s abusing them. The girl next to me said ‘I can’t believe he just said that, he’s my idol’ and I said ‘Well get yourself a new idol.'” Justin Bieber and his entourage hanging by the pool at the Perth Hyatt Regency. Source: Supplied

Robinett said Bieber also jumped into the pool from an upper level.

“There were two little boys having a ball around the pool and Justin said ‘Hey kids, don’t do this’ and then jumped into the pool,” Robinett said. “He did it twice. These impressionable little boys who saw him jumping into the pool and behaving like that. There was a heavily pregnant woman at the pool who heard him call someone else a beached whale, how did she feel hearing him say that?”

Robinett said Bieber’s security team insisted no one at the pool take photographs – although she managed to snap Bieber and his entourage.

The hotel had closed the pool and gym for Bieber’s use on Saturday, but he mixed with the public on Sunday – hours before his final Australian concert.

“I understand he’s 19, he’s surrounded by meatheads who pander to his every need. He’s immature, he needs leadership and guidance. He may come through, I hope he lives long enough to learn some lessons and do some good things,” Robinett said.

“He needs some leadership. Someone should be guiding him to not speak to women like that.”

A bodyguard for Justin Bieber has been filmed kicking and threatening to slash the tyres of a parazzo in Sydney. Courtesy Aussie/LiveLeak

Bieber flies out of Australia today; the Perth show was the last date of his world tour.

Hyatt Regency marketing communications manager Rachelle Taylor would not confirm the hotel had received a complaint.

“We are a hotel, we have hundreds of guests staying with us, we simply cannot speak on behalf of every single guest that comes in and interacts with another guest. But obviously we want all our guests to feel comfortable and not intimated by anyone. We have security, as do any VIP guests, they have their own security,” she said.