John Singleton receives tip against his own horse 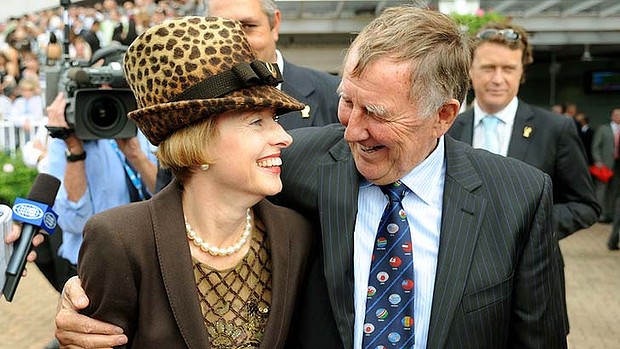 At 4.28pm on Saturday, horse trainer Gai Waterhouse sent an urgent text message to her bookmaker son Tom, in Melbourne. “Need to speak immediately,” she wrote, and Tom, who was working at his Moonee Ponds betting centre, duly complied.

Even in the soap opera that is sometimes the Waterhouse racing dynasty, it’s difficult to think of a more ironically named runner than More Joyous, the six-year old mare that on Saturday delivered the most spectacular controversy to hit racing for some time. With 21 wins from 31 starts and nearly $4.5 million in prize money, the champion owned by John Singleton and trained by Waterhouse lined up as second favourite at Royal Randwick for the 1400 metres All Ages Stakes in a keenly anticipated showdown with Gerry Harvey’s All Too Hard.

But even before the race, Singleton appeared agitated, remonstrating with Waterhouse in the parade ring. Unless More Joyous won or placed well, he told her, his horses would be leaving her stables. Sure enough, More Joyous tanked, finishing seventh behind All Too Hard, causing Singleton to erupt.

“All my horses are leaving Gai’s tomorrow,” he told Channel Seven, citing a “conflict of interest” involving Waterhouse and her son Tom. Singleton had wanted to place $100,000 on More Joyous, he said, but had discovered through “trusted friends” before the race that the horse “had problems”.

These “friends”, including a former group one jockey, had, the night before, been talking with Tom Waterhouse, who had told them the horse “could never win”.

“I never knew anything, I never said anything,” he says.

“I actually backed More Joyous, and lost $300,000 … I’m angry, because what [Singleton] has said is defamatory, and I’m seeing my lawyers about it.”

It has since been revealed that More Joyous did have heat problems in her neck on Thursday morning. She was treated with an antibiotic and on Saturday morning was given the OK to race by both Waterhouse’s and Singleton’s vets. Asked by chief steward Ray Murrihy at a post-race inquiry why she had not told stewards of the horse’s neck problems, Waterhouse said it had not been an issue. “Gai could get a rap over the knuckles for that,” says one racing insider.

But the onus now lies with Singleton, who will be pressured to name names at a stewards’ inquiry on Friday. Murrihy says: “As a licensed owner he is required to give us that information if we wish to pursue it.”

One of those rumoured to have been given inside information by Tom Waterhouse was rugby league legend Andrew Johns. Johns denies this.

“At the moment all we have is rumour,” Murrihy says. “So what we’ll do is look at the evidence, particularly in respect to the betting.

”We’ll look at Tom Waterhouse’s betting on that particular race, and that will tell us more than some hearsay report to the owner at a race track.”

Singleton and the Waterhouses have been close for decades. ”Tom is a genius,” Singleton told Fairfax Media last year. ”He’s far too smart for me.”

Singleton’s daughters grew up with and are close to Tom. And though Singleton and Gai Waterhouse have clashed before, this time it appears terminal.

On Sunday morning a horse trailer from Singleton’s stud pulled up at Gai Waterhouse’s stables and removed seven horses.

“Mum is thick skinned but she’ll be devastated by this,” Tom says.

Meanwhile, Singleton is taking stock. “He won’t back down,” says the racing insider. “But he’ll look to lower the velocity, and seek some stable ground. And then, if no one comes forward, the whole thing will be swept under the carpet.”