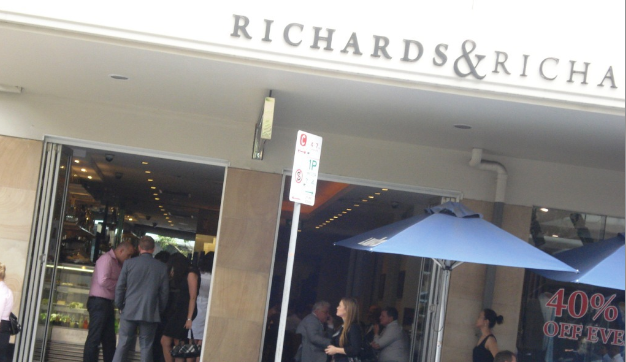 An Australian restaurant owner is at the center of a political scandal after a fundraising event menu he made that included sexist jokes about the country’s prime minister was posted to social media.

Joe Richards is the owner of R&R Cafe Bar in Brisbane, Australia, and he has claimed that the offensive menu in question was meant to be a private joke — until a staff member put it on Facebook, The Australian reports. 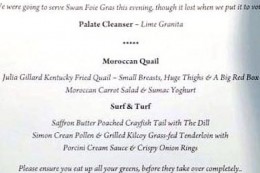 One of the jokes on the “mock menu,” as Richards described it, named a dish after Prime Minister Julia Gillard and described it as “Kentucky fried quail” with “Small Breasts, Huge Thighs, and a Big Red Box.”

Richards asserted that he came up with what he called a “light-hearted joke” in advance of a fundraising dinner hosted by Australia’s center-right Liberal party, but he didn’t actually show the menu to guests.

Still, the document has sparked considerable tension between the Liberal party and Gillard’s left-leaning Labor party. The prime minister called the menu “sexist and offensive” and typical of the Liberal party’s “pattern of behavior.”

Members of the opposition Liberal party have denied ever seeing the menu at the event, but have said they are “deeply apologetic,” according to ABC.

Inside jokes at restaurants seem to have a way of leaking out, and it’s rarely to the establishments’ benefit. A Brooklyn, N.Y., restaurant found itself in trouble for the offensive names of its menu items, while a Florida seafood joint was roundly criticized for using racial slurs on its menus, according to the New York Daily News.

Offensive messages written by restaurant employees have at the very least caused headaches for media reps at national chains like Papa John’s, Hooters and Red Lobster. 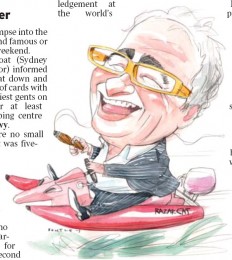 PICTURE: An old charicature of Joe Richards from the Brisbane Courier Mail.

The owner of a Brisbane restaurant has taken responsibility for a menu which made crude references to the Prime Minister’s body.

The menu was believed to have been used at a fundraiser dinner for the LNP candidate for the federal seat of Fisher, Mal Brough. Opposition Treasury spokesman Joe Hockey was the guest of honour.

It featured a dish called “Julia Gillard Kentucky Fried Quail” which made vulgar references to the Prime Minister’s body.

Earlier on Wednesday Ms Gillard called for Mr Brough to be disendorsed over what she described as a “grossly sexist and offensive” document.

But the owner of the venue, Joe Richards, has sent an email to Mr Brough saying it was a “mock” menu he created as a light-hearted joke and it was not given out on the night.

He says it is unfortunate a staff member posted it on social media.

Mr Brough earlier apologised and said the menu was written by a non-party member who thought it would be “humorous”, but is now “deeply apologetic”.

The LNP has confirmed Mr Richards is a party donor, but says he was not asked to make the admission.

The party has released a statement saying the “content of the menu card was absolutely unacceptable and has no place at any LNP event”.

Mr Hockey has tweeted that he cannot recall ever seeing the menu, but added that “it is offensive and inappropriate whenever it was put out and it is now”.

On Wednesday Ms Gillard called on Opposition Leader Tony Abbott to dump Mr Brough and said the menu followed a “pattern of behaviour” from the Liberal Party.

“Mr Abbott’s solution to this pattern of behaviour is not to show any leadership. I mean, he’s effectively stood by Mr Brough,” she said.

“Mr Brough is retaining his endorsement, presumably if Mr Abbott becomes prime minister, Mr Brough will be a senior minister in the Abbott government.”

Mr Brough has apologised. He says the menu was written by a non-party member who thought it would be “humorous”, but is now “deeply apologetic”.

Mr Abbott also condemned the menu but added it should “absolutely not” cast doubt on Mr Brough’s preselection for the Sunshine Coast seat of Fisher.

“I think we should all be bigger and better than that; whether it’s a tacky, scatological menu out the front of a Liberal Party event, whether it’s squalid jokes told at union conference dinners with ministers present,” he said.

Senior LNP frontbencher George Brandis has told Sky News Mr Brough did not see the offending menu and cannot be blamed for something he did not see.

“I spoke to Mal about it today. He knew nothing about it he never saw it,” he said.

“It was not a Liberal party or an LNP function. It was something put on by a private individual who wanted to raise money for campaign funds for a change of government.”