TTN: Aboriginal Zumba teacher Joshua Crothers has made national news from Cairns by organising a simple flash mob to promote the start of Reconciliation Week.
In light of Adam Goodes’ recent reaction against racism, Crothers’ flash mob gave Gail Mabo a platform to say the act of reconciliation “happened every day. It’s how you engage with people… acknowledging someone else.”
By abc.net.au 27 May, 2013 4:55PM AEST

Beamed from Cairns’ Esplanade into Federation Square in Melbourne, a multicultural flash mob kickstarted Reconciliation Week with an enthusiastic shake of the hips and emphatic fist pump to cap their routine off.

Dancing to Yothu Yindi’s classic ‘Djapana’, Mr Crothers says his heart thumped with the beat as cameras captured every move.

“It was awesome. I loved it,” he says. “Practicing it just doesn’t compare to the live event.”

“We spent about two weeks preparing, two hours each session. It was good to have everyone volunteer their time.”

The message behind Reconciliation Week Mr Crothers says is simple.

“For me it means we are all one,” he says. “We just need to be mindful and respectful of each others’ culture and celebrate that.”

This year marks the first time National Reconciliation Week has been launched simultaneously from two separate sites. The week aims to improve the relationship between Aboriginal and Torres Strait Islanders and non-Indigenous Australians.

Joshua and his mob do the reconciliation groove

About 30 indigenous locals got their groove on with a surprise dance at the lagoon yesterday afternoon to celebrate the launch of National Reconciliation Week.

Zumba fitness instructor and dance co-ordinator Joshua Crothers said it had been a “huge” effort to organise the flash mob.

“There were heaps of people volunteering their time, and we pulled it off,” Mr Crothers said.

He said the dance was performed almost entirely by locals, with several staff members from indigenous companies and dance groups joining in on the fun.

The performance was followed by an official opening ceremony, with Cairns Mayor Bob Manning and special guest speaker Gail Mabo giving their thoughts on reconciliation.

“It’s how you engage with people, saying thank you and acknowledging someone else,” she said.

Cr Manning said the Far North had a rich Aboriginal history, which was recognised through council’s re-launched Reconciliation Action Plan.

“Our city is a major hub for Cape, Gulf and Torres Strait Islander communities,” he said.

“Our Reconciliation Action Plan details what we will do to honour our commitment to creating better relationships between Aboriginal and Torres Strait Islander people and the wider community.” 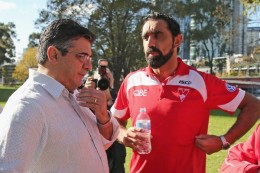 A 13-year-old girl has apologised for calling Swans forward Adam Goodes an “ape”, an incident that the AFL star said rendered his side’s breakthrough win over the Magpies meaningless.

Goodes was the star for Sydney with three goals in his side’s famous 47-point salute over Collingwood at the MCG that opened Indigenous Round.

But the 328-gamer fell victim to a racial vilification incident after being verbally abused by a Magpies fan, who was then escorted from the venue.

The win, the first of its kind in 13 years, to play such a pivotal role … just means nothing. I turned around and I saw it was a young girl I was just like…really?

Goodes, with security staff around him, had stood only metres away and pointed to her following a verbal clash with the fan.

Victoria Police said on Saturday morning that a 13-year-old girl was interviewed over the incident and released last night pending further inquiries.

But Goodes said he is not blaming the girl, saying she deserved to be supported and educated about why the racist comment was unacceptable.

“I’m pretty gutted to be honest,” he told reporters in Melbourne on Saturday morning.

“The win, the first in 13 years, to be up 47 points against Collingwood, to play such a pivotal role just sort of means nothing.

“To come to the boundary line and hear a 13-year-old girl call me an ‘ape’, and it’s not the first time on a footy field that I’ve been referred to as a ‘monkey’ or an ‘ape’, it was shattering.”

Goodes announced on Twitter about an hour and a half later that the girl had been in touch.

Just received a phone call from a young girl apologizing for her actions. Lets support her please#racismitstopswithme #IndigenousRound

The incident, which took place in the opening match of the AFL’s Indigenous Round, soured the Swans’ win against an often insipid Magpies outfit.

In a drought-breaking victory for the Swans it was their first win over the Magpies at the MCG since 2000.

The two-time premiership winner was visibly shaken and left the field before the full-time siren in a win that saw him reach a milestone 400 goals in senior footy.

“I had to leave the arena. It just broke my heart,” Goodes said.

‘I don’t put any blame on her’

The two-time Brownlow Medallist was adamant that he was sure the girl did not understand the implications of what she said.

The 16-season stalwart has received an outpouring of support on social media from players and fans alike, but said the girl at the centre of the storm deserves just as much support.

“I’ve had fantastic support over the past 24 hours,” Goodes said.

“I just hope that people give the 13 year old girl the same sort of support because she needs it, her family needs it, and the people around them need it.

“It’s not a witch-hunt, I don’t want people to go after this young girl.

“We’ve just got to help educate society better so it doesn’t happen again.”

Goodes said that Victoria Police asked if he would like to press charges but he declined, reiterating that the girl needs to learn why her abuse was hurtful.

The media, Andrew Demetriou, Nicky Winmar, myself … we’re not going to stand for racism in our game.

“Unfortunately it’s what she hears, in the environment she’s grown up in that has made her think that it’s OK to call people names.”

“I guarantee she has no idea right now how it makes people feel to call them an ape.”

“If people have got a problem with me, say it to me. If you’re going to hurt my feelings, I’m going to point you out,” Goodes said.

“The media, Andrew Demetriou, Nicky Winmar, myself … we’re not going to stand for racism in our game.”

AFL chief executive Andrew Demetriou said the league will not seek any further punishment for the girl.

He said it was a sad affair that the comment came from a minor.

“I urge everybody, including the media, to be very, very careful about how you pursue this young girl,” he said.

“Because what this girl needs now is some counselling and some support rather than anyone going after her.

“I say that genuinely because she’s a very young girl and she’s a minor.”

Collingwood president Eddie McGuire visited with Goodes in the Swans rooms after Friday night’s game and apologised on behalf of the club.

But Goodes said he did not blame the Magpies either.

“It’s an issue of what are our parents teaching our kids?

“My mum taught me to treat people the way I want to be treated.”