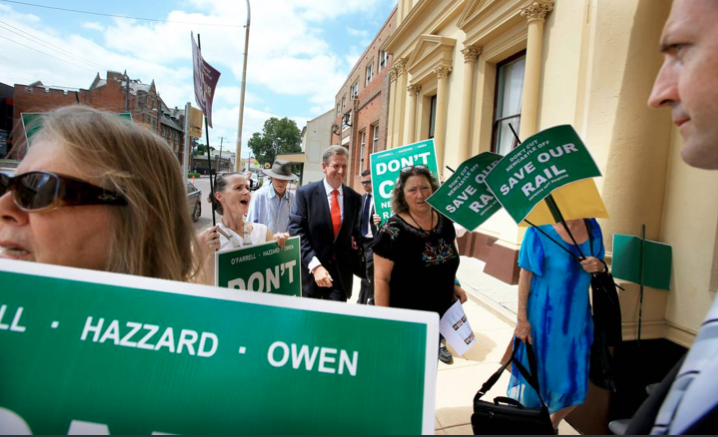 TTN: Whilst $5.6m of NSW’ Hunter Investment and Infrastructure Fund is sure to be spent on Maitland’s  biggest sportsground, remaining question marks over rail infrastructure from Maitland to Newcastle are prohibiting tourism investment between the centres.

In the meeting tackling the major issues of a Stockton health facility closure, the CBD precinct light rail, and the main attraction – a mining town’s plea to have a mine license approved to secure jobs.

From the Newcastle Herald, 10th February 2014

PREMIER Barry O’Farrell expressed his strongest support yet for the replacement of Newcastle’s heavy rail with light rail.
He told an audience in Maitland – said to be the project’s most ardent critics – that he would not ‘‘walk away’’ from making the changes.

But he would not commit to exactly when construction would start, instead leaving it to his transport and planning ministers to provide the details ‘‘in the not too distant future’’.

And while the Premier and Maitland MP Robyn Parker announced $5.6million from the Hunter Infrastructure and Investment Fund towards the upgrade of Maitland’s No.1 sportsground, how the remaining $25million or so would be spent has not been revealed.

Speaking at the sportsground ahead of a community cabinet forum at Maitland he wanted ‘‘everything to happen tomorrow’’ when asked whether work would start on light rail before the next state election in a year.

The ‘‘HIIF’’, promised during the last election as $350million over four years, had been ‘‘a success’’ and ‘‘injected funding into a region of the state that was long neglected’’ despite ‘‘scepticism’’ from the media.

‘‘It has been a success and we tend not to discard successes,’’ Mr O’Farrell said.

‘‘We do need to make the point that you can’t top up funds unless you have strong economic growth.’’

The government has previously said any money left over from $340million allocated from the expected Port of Newcastle lease proceeds would go into the fund.

But most, if not all, of the cash, on top of $120million the government committed earlier to revitalise the inner city, is expected to be needed for the installation of light rail in Newcastle.

More than a dozen rail supporters outside the Town Hall yesterday, protesting against the decision to cut   the heavy rail line to Newcastle station and shouting ‘‘shame’’ as ministers entered.

Inside, Mr O’Farrell said the project would benefit the whole region.

‘‘Yes, I see light rail as a modern efficient transport system that can not only service the CBD but ultimately it could spread connections across this part of … NSW.’’

Other participants quizzed ministers, seated on stage, about the provision of various government services.

But the dominant issue was mining – and the government could please no one.

Among the audience were 20 to 30 Drayton mine workers, wearing their fluoro uniforms, there to ask for the approval of the company’s proposed Drayton South mine.

This would keep them employed but would sit on the doorstep of world renowned horse studs.

‘‘May I remind you, when the O’Farrell government was elected it was a result of the people of NSW being fed up with the dishonesty, innuendo and scent of corruption by the then Labor government,’’ she said.

‘‘I can assure you all that the common consensus is that you are far from the heroes we had hoped you to be.’’

Planning Minister Brad Hazzard said the government could do no more to ensure balanced processes for assessing the impacts of mining projects.

Mr O’Farrell said the government had struck the right balance between mining and other land uses.

‘‘And I’m pretty comfortable with that.’’

From the Newcastle Herald, 22nd January 2014

ALMOST 60,000 fewer commuters used Newcastle buses and ferries in the three months to September 2013 compared with the year before, State Transit figures reveal.

This occurred despite 1108 new services running between July and September last year.

The loss of patronage has been happening at least since 2010, the report states.

“These performance figures are part of a broader trend, and are shameful in light of the NSW government’s apparent desire to grow patronage on public transport as a key goal of NSW 2021,” she said.

Dr Faruqi blamed the inadequacy of the bus network for the loss in patronage.

“The sad truth is that Newcastle buses are too often unreliable, low in frequency, and have lengthy journey times compared to a trip in a private vehicle,” she said.

“It’s no wonder there are fewer people taking this public transport option.”

Dr Faruqi said public transport in Newcastle would not improve unless the frequency and reliability of buses improved.

She said the state government needed to create a public transport plan for Newcastle instead of focusing its energies on removing the heavy rail line and replacing it with light rail.

“Of course light rail can be added to existing public transport once there is an overall transport master plan for Newcastle . . . but we need to retain the heavy rail and improve the frequency and reliability of Newcastle buses,” Dr Faruqi said.

State Transit said it was committed to increasing the share of commuter trips by public transport.

It said it was working hard to attract customers to bus services by maintaining a high level of reliability, comfort and convenience for passengers.

It noted in the report that on-time running of bus services was important to everyone and that many factors could affect reliability, including traffic accidents, special events, wet-weather conditions and roadworks.