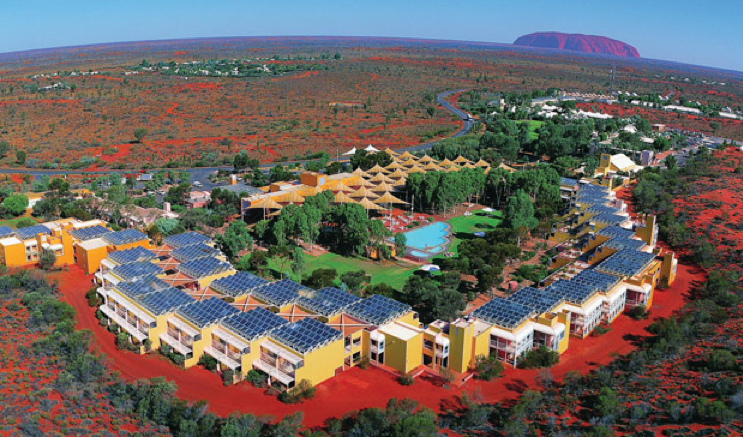 The former board chairman of Voyages Indigenous Tourism Australia has called for Federal Government action on the Ayers Rock Resort in the Northern Territory.

This week the Indigenous Land Corporation (ILC) announced it had written $62 million off the value of the resort near Uluru that it paid $317 million to buy in 2010.

It also said it was having trouble dealing with its annual interest repayments of about $10 million a year.

Voyages Indigenous Tourism Australia runs the resort on behalf of the ILC.

The contracts of former chairman David Baffsky and four directors of the nine-member Voyages board have not been renewed.

Mr Baffsky says it is perplexing that the experience of the sacked board members has been wasted but it is more important to preserve the resort’s Indigenous training program.

“I think the government has to take some decisive action because they are putting at risk probably the most successful indigenous employment and training program in tourism that has ever been created in Australia,” he said.

Mr Baffsky says losing a high-calibre board recognised both nationally and internationally for its acumen in business and tourism is worrying.

He says the new board members have almost no track record in tourism and hospitality, something that will not be lost on significant tourism players like the airlines.

He says those who understand tourism in remote areas, including Ayers Rock Resort, know that airline access and airfares are probably the two most important drivers of business.

In an email to staff, obtained by the ABC, Mr Klein says that without the board: “We could not have achieved the many milestones that we have hit in the last few years.”

He says Voyages achieved operational profits of $18.4 million and $12.4 million dollars in the last two years.

That contrasts with statements by ILC chairwoman Dawn Casey, who said the resort was losing money and not meeting $10 million annual interest payments on the $198 million loan taken out to buy the resort.

Federal Indigenous Affairs Minister Senator Nigel Scullion says he is worried about the impact of the changes on the resort’s Indigenous training program.

“I just hope that this does not have an impact on how they feel about the security of their employment,” he said.

Senator Scullion says the resignation of Voyages managing director Koos Klein is a reflection of the seriousness of the matter.

The acting chief executive of Tourism NT, Adam Coward, says he is concerned about what is happening at Ayers Rock Resort.

“We are always looking at The Rock and that region, and the whole region in central Australia,” he said.

“This information … has been high on the agenda for us to get on the phones and start looking at what we need to do to continue to help.”

The Indigenous Land Corporation (ILC) is making sweeping changes after writing off more than $62 million from the value of its flagship tourism property at Uluru.

The Federally-funded corporation paid $317 million for the Ayers Rock Resort in 2010 but its value has now been written down to about $250 million.

Chairwoman Dawn Casey says two ILC board members were fired this week and the board of Voyages Indigenous Tourism Australia, which manages the operation of the resort, has been changed.

A new chair and five new directors have been appointed to the nine-member Voyages board.

Ms Casey says the ILC bought the resort despite warnings from then finance minister Penny Wong and Indigenous affairs minister Jenny Macklin that they were paying too much.

She says the resort, about 450 kilometres south-west of Alice Springs, was acquired to provide a commercial base for the running of an Indigenous tourism job training centre at Yulara.

In 2010, it was projected that 200 Indigenous employees would be working at the resort by 2015, and by 2018 that number should increase to about 50 per cent of the workforce of more than 600 staff.

The resort currently employs 150 Indigenous workers, and 60 more Indigenous people are in training.

Ms Casey now questions the strategy because of skyrocketing costs.

“Is that the most cost-effective way to introduce training for Indigenous people around the country?” she asked.

“From the new board’s perspective it would seem to have been a large amount of money to pay to develop an Indigenous training centre because of the conditions at Ayers Rock at the time of the acquisition,” she said.

She says the resort’s profits are not meeting interest repayments, let alone paying down the principal.

“It is in the order of some $10 million annually,” she said.

“You must have a commercial return … the writedown comes as a pretty significant issue for the new ILC board.”

An ILC spokesman says the resort needs to improve its marketing and attract more visitors.

Plans for a golf course near the resort are still subject to an Environmental Impact Statement (EIS) process but, given the state of ILC finances, the project seems unlikely to go ahead.