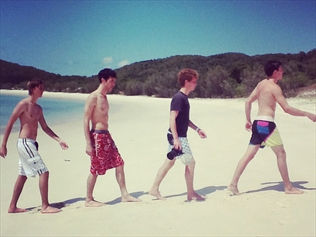 PHOTOGRAPHS of Hamilton Island and Sydney have been showcased to a global audience of more than a million people thanks to an innovative social media tourism campaign.

Hamilton Island hosted its first ‘Instameet’ on Sunday, with fans of the photography app, Instagram, invited to meet up and take pictures of glamorous locations including Passage Peak, and Whitehaven Beach.

A second Instameet was held outside Sydney Opera House on Monday night, with photos from both events posted on Instagram and viewed by a global audience of followers – estimated to be well in excess of a million people.

The Instameets were led by the Pilgramers, a group of four young American photographers and film makers, who also shot a short YouTube video about their time in Australia.

Their documentary is expected to be posted online (the latest in a series by the Pilgramers) in January, and garner further publicity for Australia in overseas tourist markets.

Organisers of the Hamilton Island Instameet believe the photographs and video will help boost visitor numbers.

Hamilton Island communications manager Sophie Baker said social media campaigns work because people are more likely to take ideas about their next holiday from their mates than traditional advertising.

“Hosting our own ultimate Instameet is the perfect way to generate incredible visual social media content,” she added. Tourism Tropical North Queensland (TTNQ), which was not involved in the Hamilton Island event, is also planning a series of social media campaigns. “There is plenty of potential for this sort of thing,” a TTNQ spokesman told AAP.

“We still have to pick up our international visitation but this is where the growth has been earmarked in our 2015 plans,” he added.

Pilgramer Ryan Carl said he hoped more Instameets would be held in Australia, with people meeting up simply to make friends and take photos.

“It really just takes one person to step up and get people together and it will be interesting to see if that happens,” he told AAP.

Several small Instameets were held in Melbourne, Brisbane and Sydney earlier this year.