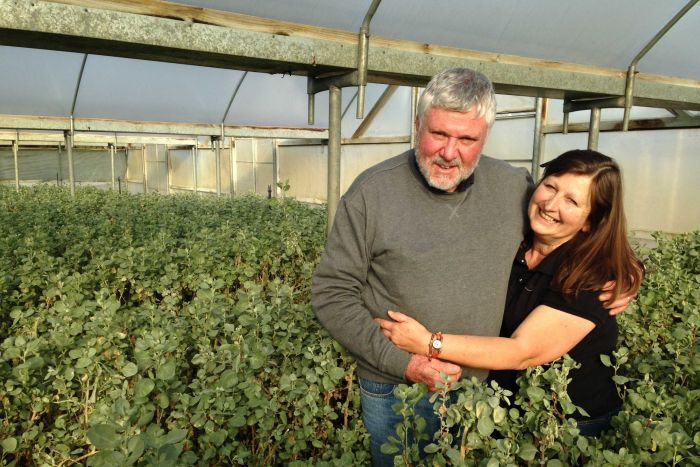 How many of Australia’s 2500 native food plants have you tried?

Due to the work of a South Australian couple; kutjera, quandong and Tanami apples are no longer foreign to people in the country they are natively grown: Australia.

The aim was two-fold: to find and save some of Australia’s nutritious native plants and to empower Aboriginal communities, by giving them ownership of cultivation sites.

Reginald Battarbee was severely injured in World War One and reluctantly took up painting scenes from the Australian outback, because he was unable to endure other work.

In his travels he just happened across Albert Namatjira, who taught him about the land and Aboriginal culture, in exchange for painting lessons.

“When dad was painting with Albert and his kin, I was off running with the children, eating bush tucker,” Mrs Quarmby says.

“The people were proud people, with strong families.

“And they were literate and numerate in up to five languages.

“How could we have let it happen that now it’s like a third world out in the outback?”

The large sums of money spent on education and infrastructure in some Aboriginal communities has, Mrs Quarmby says, created a ‘generation of entitlement’.

“By giving people too much money and not enough life skills, we create victims without any sort of direction,” she says.

In 2001 he spent more than six months out bush, with Aboriginal elders, sourcing bush foods he knew could be sustainably propagated.

Many of the plants were on the verge of extinction.

“What we didn’t count on was the apathetic attitude of Australians toward their own cuisine,” Mr Quarmby says.

“We actually had these things in Coles stores back in 2001, but it didn’t take off.

“So we had to wait until the celebrity chefs started to serve it and actually advertise that we had these things.”

Celebrity chef Kylie Kwong, who often appears on cooking show Masterchef, is one of the Quarmby’s regular customers.

To date Outback Pride boasts the planting of about 500,000 bush food plants in 26 communities.

The co-operative’s biggest challenge is now keeping up with demand and mobilising Aboriginal communities to get involved.

“It’s not an easy task but we’re doing what we can,” Mr Quarmby says.

“The beauty of Australian native food is it’s their food.

“We have signed a memorandum of understanding with each of the communities … we won’t sell bush food plants to any other Australians other than Indigenous people.

“We’re trying to give them a leg up and retain ownership of their industry.”

Mike and Gayle Quarmby, since 2001, have planted over 500,000 bushfood plants on Aboriginal community sites which are spread mainly over the central area of Australia. Over 750,000km have been travelled by the Quarmbys, and that – together with thousands of hours of freely given hard, hot and dusty work – has been the essence of this journey.

This Outback Pride project has been largely funded by Mike and Gayle in collaboration with State and Federal funding bodies. The objective of the project has been the development of horticultural skills on remote Aboriginal communities using positive ethical and environmental principles, with community health and wellbeing as the measurable outcome.

Together with the work at community level, there has been an equal amount of research and development undertaken back at Reedy Creek in the areas of:

Production plots have been established on the following communities since 2001:

Assistance with project planning and feasibility studies have been carried out for the following communities;

Plant species selections for these sites has been made in conjunction with community elders, historical documents and natural vegetation surveys. This information has been balanced against commercial viability and environmental factors.

The success of this project has been hinged on the commitment of the individual communities involved and the relevant government support systems available for participants.