Indigenous design in the air – with teamwork 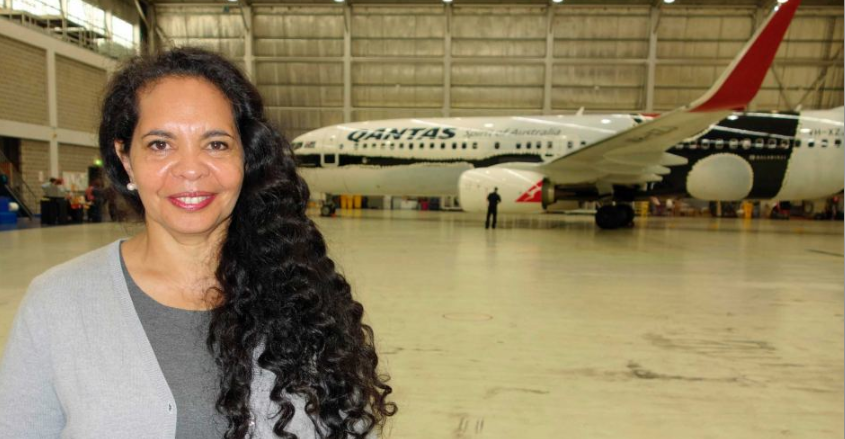 A new piece of Indigenous art is taking to the skies on a Qantas plane to promote Australian culture around the world.

The team behind the airborne art project hopes it will prompt greater recognition and curiosity towards Aboriginal art.

An ochre canvas painted by the late Indigenous artist Paddy Bedford was selected to inspire the fourth flying artwork commissioned by Qantas.

The visually striking aircraft was shown off to a team of collaborators including staff from the National Gallery of Australia in a Canberra hanger.

The original painting which inspired the plane artwork, Medicine Pocket was created by Mr Bedford using earth pigments on canvas in 2005.

The National Gallery of Australia’s Franchesca Cubillo says it tells the story of the landscape in the East Kimberley.

“This is referencing an important waterhole or a site of living water,” she said.

Designer Ros Moriarty who collaborated on the project says it is an important piece.

“A magnificent piece of work from a world renowned artist, a luminary in the Indigenous and the Australian art scene,” she said.

The team behind the project included Mr Bedford’s family, the Bedford Trust, the National Gallery of Australia, an Indigenous owned design company, Qantas and Boeing.

They spent 18 months translating some of Mr Bedford’s original vision into a form that could adorn an aircraft.

The completed design has been named Mendoowoorrji after Mr Bedford’s mother.

The team of collaborators say the translation of Mr Bedford’s original dreaming image onto the Boeing 737 aircraft was far from easy.

“He was one of the first East Kimberley painters to paint wet-on-wet, which meant he was loading up his paintbrush,” Ms Moriarty said.

“It included stringing a number of paint brushes together, wrapping scourers on the end of implements.

“These paint schemes last about ten years. So the paint dries very quickly, a bit like nail polish!

“So for the engineers and the technicians to be able to apply this technique to get a painterly feel is actually a phenomenal job that was achieved in the Boeing paint shop.”

Ms Moriarty says 140 nylon stencils were needed to define every line and the 702 dots featured in the Mendoowoorrji design.

Qantas says the plane’s skin will be due for a refresher in about a decade and will carry an estimated 5 million passengers during its lifetime.