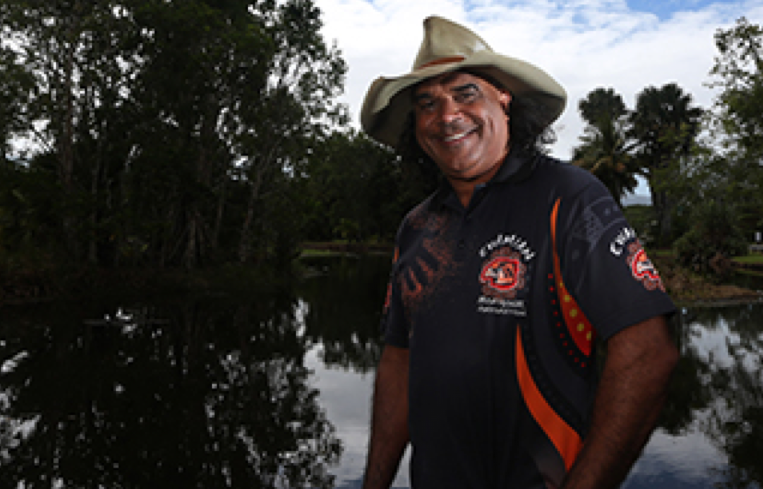 Hot springs tourist attraction west of Cairns to be revived

A LITTLE-known hot springs tourist attraction west of Cairns is being revived by indigenous cultural expert David Dahwurr Hudson and the Ewamian people.

The former Tjapukai Aboriginal Cultural Parkboss is the face behind Talaroohot springs, 360km west of Cairns on the Savannah Waybetween the Undaralava tubes and Georgetown.

Mr Hudson has been appointed project consultant for the hot springs, which is part of a 36,000ha former cattle station bought by the Indigenous Land Corporation and the National Reserve System for $4 million to be managed by its traditional owners, the Ewamian people.

He is a descendant on his father’s side.

He said there was just 500 head of cattle on the land with the rest of the property to be transformed into a nature reserve.

“Talaroo Hot Springs was open to visitors 12 years ago but has since been operated solely as a cattle station,” he said.

“We intend to reopen the camp ground to the public in 2014 and our long-term plan is to build a high-end healing eco and cultural tourism experience utilising our airstrip to get people out there.

“The property has a functioning swimming pool where we can pump the hot spring water in so people can sit in the warm water and watch the amazing night sky and its stars.

“Unlike other springs this hot water does not come from the artesian bore.

“But we have not been able to trace its source.

“Talaroo is granite country and the water, which is around 80-120C, comes to the surface at the top of rocky mounds.”

Mr Hudson said scientists from the University of Queensland had been brought in to survey the springs and water quality.

He said there was the possibility of a geothermal power station as well as other commercial uses for the water.

“A recent survey of the property found 126 species of birds and there is an incredible amount of wildlife including freshwater crocodiles.

“Talaroo is on the Einasleigh River so you can swim and fish, plus there will be walking trails. We will erect an enclosed fenced area and make it a memorial park in respect to our Ewamian people who were massacred on our country by the early settlers during the 1890s.

“A walk will lead to the park and to historical areas like the granite rocks with deep grooves where our people used to sharpen their spear heads and stone axes.”

Mr Hudson said four Ewamian people had been hired as rangers and there would be more jobs as the project matured.

He said it would be marketed with other attractions in the area, including the Undara lava tubes, the Gemfields and Cobbold Gorge.

Mr Hudson is also developing an indigenous cultural experience at Dreamworld on the Gold Coast.