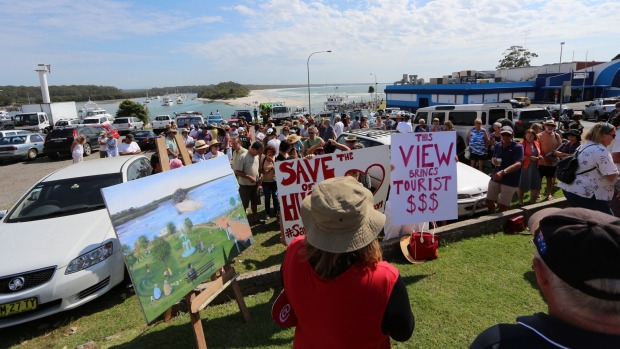 Picture: Residents are concerned about development on the Huskisson waterfront.

TTN: Club Jervis Bay are threatening to sell Huskisson NSW’s key strip to the highest bidder after the Shoalhaven Shire Council said they couldn’t justify spending $4.3m on buying the block from Club Jervis Bay. Formerly the Huskisson RSL Club, Club Jervis Bay claim the sale is required for financing activities, even though their annual report states the club has $3.2m in ‘assets held for resale’ and made $9.1m in poker machine revenue alone in 2014.

The fate of the “jewel of Jervis Bay”, a block of land at Huskisson on the South Coast worth an estimated $8 million, will be decided by the Shoalhaven Council in January.

The block, at 59 Owen Street, has unimpeded views of Jervis Bay and Currambene Creek and is being used as a makeshift car park.

The land is owned by Club Jervis Bay, formerly the Huskisson RSL Club, and is for sale by tender after the council declined the opportunity to buy the land for $4.3 million.

Club Jervis Bay president Rod Simpson said that in 2007 the club had been offered up to $8 million for the block.

“We also received offers of $6 and $7 million, but then council put restrictions on the block, and the buyers walked away,” he said.

The height restrictions placed on the site allow a maximum of three storeys.

Shoalhaven mayor Joanna Gash told Fairfax Media the council could not afford to invest in the site, particularly because the community is opposed to development on the land.

“The ultimate goal would be to bring it [the land] into public ownership,” Ms Gash said.

“But the state and federal governments have a low interest in something that doesn’t create jobs.

“There are many avenues of development that could preserve the view. The community needs to come to grips with this.”

The council’s decision not to purchase the land was reached in October and jump-started a campaign by the community, which has called on the council to reconsider at its meeting on January 22.

The campaign’s Facebook page has received about 3500 likes since it began in late November. The regular population of the tourist town is 735.

Chair of the Save the Heart of Huskisson campaign, Kate Broadhurst, said the community was worried the land would be purchased by developers. She said the group was not against all forms of development.

Ms Broadhurst said it is hoped the space would be brought into public ownership and turned into a park or town square.

“But it’s not about the return of investment, it’s about the legacy of the site and the vision for the future. There is a frustration with council because they don’t seem to get how important the block is to tourism.

“We can’t afford to lose this land and lose this view … it really is the heart of Huskisson.”

Mr Simpson said the council should come back to the club with a counter-offer after the next meeting, before the tender process ends on February 12.

He said the club’s top priority is selling the site, and the money is needed to improve the club’s facilities.

“We need to think about the club’s interests first … it makes sense to take the top price.”

Labor candidate for South Coast Fiona Phillips said she hoped the council could find the funds to purchase the land by January 22 and the issue could be resolved.

“I will be aghast if it doesn’t happen,” she said.