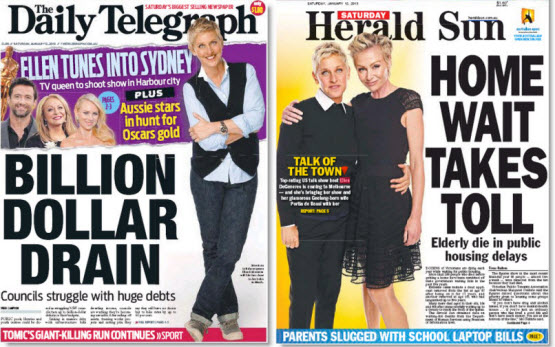 Another year, another river of cringeworthy coverage from the annual “G’day USA” event by News Limited journos sucking eagerly on the publicity teat. And this year they had a talk show queen to add to the mix.

The weekend tabloids went to town on the 10th anniversary of the annual LA hoke-fest, with the Saturday editions of The Daily Telegraph and the Herald Sun splashing with Ellen’s trip Down Under, courtesy of pill peddlers Swisse, Qantas and the NSW government.

Swisse spinner Mitch Catlin’s fingerprints have been all over this year’s celebrations, with the Hun’s Kim Wilson (wife of editor Damon Johnston) noting subtly the Ellen trip was “a coup for wellness brand Swisse” in a page five yarn under the headline “From LA to G’day”. An accompanying editorial, apparently written by a kindergarten intern, pronounced that “along the hoop-la [sic] will be the world stage [sic] of exposure for Australia”.

To the Hun’s credit, the paper managed to include disclosure that Wilson’s flights were paid for by Swisse and Qantas on one of its stories today, while the Tele failed to mention Wilson’s financial arrangements at all.

On Saturday, the Tele towelled up its southern sister, managing to stretch its Ellen-LA coverage across the first three pages, an editorial and an additional two-page “LA Confidential” spread written by junketeering gossip Ros Reines. In an embarrassing piece titled “Ellen had us dancing in Delight”, a breathless Reines noted Ellen, “who is quite beautiful in real life”, had transfixed the doting Oz contingent. “By the end of taping, this hardened, blase group of journalists almost floated from the studio believing, if only for a moment, that we had somehow become better people,” she explained, while failing to explain the exact same stunt had been pulled by Oprah two years ago.

Yesterday, Reines was shamelessly retweeting Catlin, whose brand has been eagerly eyeing the massive US supplement market.

The Sunday Tele, as part of its extensive coverage, had the moves it choreographed for the famously dance-crazed comedian when she arrives:

But there were serious economic forces at play too. Ellen’s visit, the Hun reckoned, would “boost the nation’s ailing tourism industry” without producing any evidence at all. In the 12 months after the previous near-identical visit by Oprah, the number of US tourists visiting Australia actually declined 3.7%. The Tele trotted out NSW acting premier Andrew Stoner — whose government contributed a “modest sum” to bankroll the trip — to foreshadow a “huge return” for NSW taxpayers.

Not much has changed when it comes to News’ approach. In 2010 Crikey revealed the complete lack of disclosure at the papers, which spent weeks in the lead-up running dubious news stories. While Wilson’s copy this time around contained a small disclosure that she “was flown to LA courtesy of Swisse and Qantas”, the average reader could easily be excused for missing it among the blizzard.

Hilariously, the annual event is completely ignored by local Los Angeles media, with the story failing to make the Saturday edition of the LA Times, garnering just a short brief online on Friday morning.