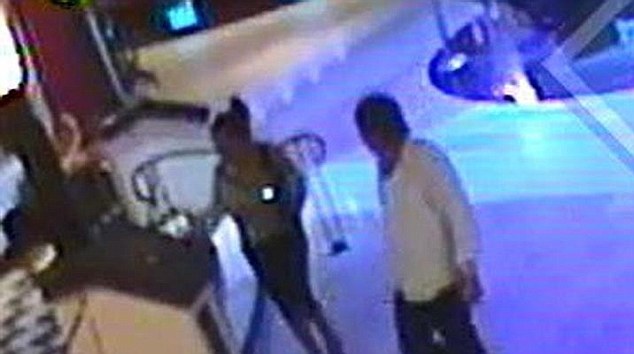 From the UK’s Daily Mail

A man who plunged seven floors from a Cairns high-rise casino hotel, smashing through a glass awning, may have been murdered, police say.

The 51-year-old man from Tully, in Queensland’s far north, died after falling from a balcony in a guest room early on Saturday morning.

Queensland police are trying to track down a woman who spoke to him before he fell from an upper floor of the Pullman Reef Hotel Casino, on Wharf Street, about 6.20am. A 51-year-old man, seen here on the right, fell from an upper floor of the hotel about 6.20am on Saturday

They have released grainy CCTV footage of a woman wearing a striped top who’d spoken to him about two hours earlier at 4.15am.

The man was wearing a white shirt as they spoke.

‘We are very keen to try and work out who she is,’ a police spokesman told ABC radio.

They also want to talk to three people in a car the man, who reportedly worked in the sugarcane industry, also spoke to before he fell. The man was a guest at the Reef Hotel in Cairns.

‘At the moment (we) are treating it as if it is homicide, but we’re remaining open as to whether or not it actually is,’ Cairns Crime Investigations Branch Detective Sergeant Adrian Worth has told The Cairns Post.

He said a male associate of the man had been helping police but he’s been released without charge.

Police have also interviewed a number of other witnesses.

‘We would also like to hear anything that might help our investigation from anyone who was in adjoining or nearby hotel rooms at the time of the incident,’ he said.

The Pullman Reef Hotel Casino is a large complex with four restaurants, four bars, a casino nightclub, and a roof-top Rainforest Dome.

The hotel’s director Wayne Reynolds told Daily Mail Australia: ‘We give our deepest condolences to the family and are assisting police with their investigations.’ Staff at the hotel in Cairns became aware of the incident at 6.20a.m.