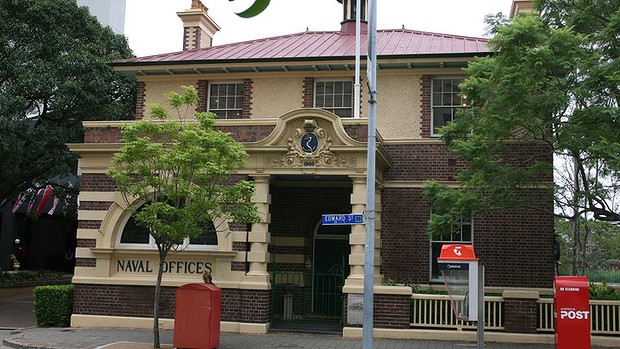 Queensland’s first home for its naval forces – a brick building down near the Stamford Hotel and Brisbane’s Botanic Gardens – has been listed into the Queensland Heritage Register.

The original Naval Offices, at the Botanic Gardens end of Edward Street, was built in 1901 by the Queensland Government and used as the home for naval forces until 1977.

It became a restaurant in 1980 and most recently has been leased to the Stamford Hotel on Edward Street.

The building was first nominated for the Queensland Heritage Register in 1992, but was rejected because it was – at one stage – it was a federal government building.

Commonwealth-owned places were not subject to state legislation.

“After the Naval Offices were returned to the Queensland Government, the State Government nominated it for heritage listing – fulfilling a condition of the ownership transfer,” Environment and Heritage Protection Minister Andrew Powell said.

“We’re delighted this important and well-known building could be returned to the protection of the Queensland Heritage Register.”

It was built in 1901 for the Queensland Marine Defence Force, then used by the Australian Commonwealth Navy and later the Royal Australian Navy, before being vacated in 1977.

“Works of this quality are few and far between. A large plaster coat of arms of the British monarch is positioned above the doors of the small entry foyer.”

It is part of a string of heritage buildings on the lower section of Edward Street.