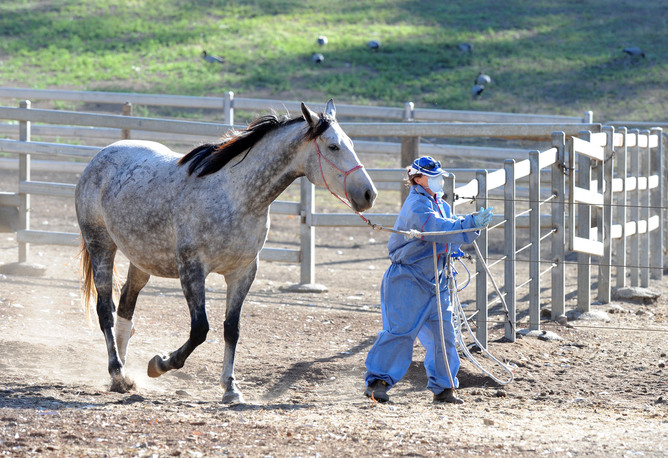 A confirmed case of Hendra virus has killed a horse in News South Wales for the first time in two years.

The horse from a property west of Macksville on the mid-north coast has been buried and a second horse vaccinated and tested along with other animals on the farm.

It is the same region where the virus, which is spread by flying foxes, killed 10 horses at eight properties two years ago.

The Department of Primary Industries says there is a low risk to four people, including a vet, who came into contact with the sick animal.

There have been eight cases of Hendra virus in horses across the border in Queensland in the past 12 months.

The bat-borne disease has claimed the lives of four of the seven people infected and has worried horse owners and workers since it was first identified in Brisbane in 1994.

It has killed more than 80 horses in Queensland and northern New South Wales.

Last year a vaccine for horses was released after research was fast-tracked, but no vaccine exists for humans.

Explainer: Why is Hendra virus so dangerous?

Queensland authorities have confirmed a horse on a farm south of Brisbane has died of Hendra virus, which can spread from horses to humans and has killed four of the seven people ever known to have been infected.

In the following Q+A, Dr Peter Daniels, Assistant Director of the CSIRO’s Australian Animal Health Laboratory explains why even one-off cases of Hendra infection are a source of great concern:

What is Hendra virus?

Hendra is a new emerging infectious disease agent that was discovered in 1994. At the time, scientists at the Australian Animal Health Laboratory in Geelong, Victoria, quickly isolated and identified the virus, establishing that it had not been reported anywhere else in the world. Hendra is now recognised as one of the most dangerous virus infections for people.

What does it do?

It causes a systemic disease. It’s effects are felt throughout the whole body but in particular it causes a viral pneumonia or encephalitis. Either of these or the combination can be fatal.

Why is it such a concern that one horse in Queensland has died of Hendra virus?

Can humans pass it onto other humans?

Person to person transmission of Hendra virus hasn’t been recorded but of course the number of human cases is low. We don’t believe it happens but on the other hand it may not be impossible either.

How often do we come across infected animals?

It is only very rarely, fortunately. This current situation will be the 15th occasion on which horses have been diagnosed with the infection. It varies — some years there are one or two cases and in other years there are none.

How quickly does it spread among horses?

Hendra virus infection doesn’t spread easily among horses. There may have been cases where it has occurred but it’s usually being spread only to one or two animals in the immediate vicinity. It is always hard to know if the horses in the vicinity of a case were infected from the horse or from the primary source of infection.

What is the primary source of infection?

Hendra occurs naturally in fruit bats called flying foxes. In these animals, it’s quite common and doesn’t cause a problem except occasionally when the infection is transferred to horses.

It would seem horses get infected by eating contaminated material, so eating grass contaminated with any of those fluids from flying foxes could be a source of infection.

What is being done about it?

The research team here at the CSIRO’s Australian Animal Health Laboratory has shown that a new experimental vaccine helps to protect horses against the deadly Hendra virus.

What should people do to minimise the risk?

It’s important that people who own horses realise that the disease caused by Hendra virus in horses isn’t easily recognised. A horse will get sick and have a fever and look restless in the early stages of infection but there’s nothing to say, no clear distinguishing sign, that the horse has a Hendra virus infection.

Nonetheless, such an animal is already infectious to people and if the respiratory droplets or saliva of that animal get onto people, then there is a risk those people will become infected.

People looking after sick horses have to bear in mind that the horse might be a dangerous source of infection and take appropriate precautions. That means wearing gloves, washing hands, making sure that droplets of saliva don’t get splattered on their face while they are looking after the animal. Guidelines for veterinarians handling potential Hendra virus infection in horses can be found on the Biosecurity QLD website.