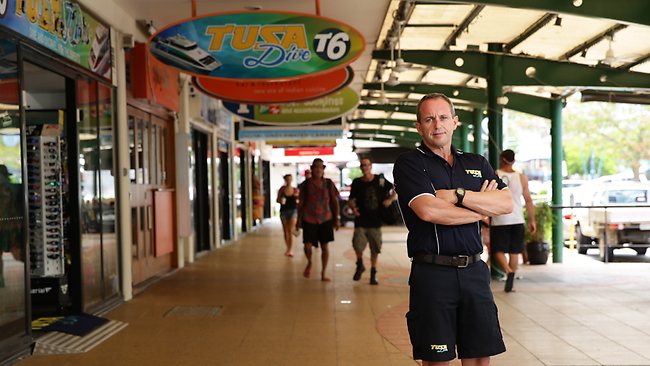 Council refuses to back down on A-frame sign position

From the cairnspost.com.au 29th January 2014

MAYOR Bob Manning is refusing to back down from the council’s ban on A-frame billboards in the city.

The council is coming under increasing pressure to reverse the ban, with leading tour operator Charlie Woodward lashing out at the clampdown.

The CaPTA Group chairman said instead of cleaning up the streets it was making the town “sterile”.

“I agree with many of my fellow tourism operators that this is a backward and unnecessary step,” he said.

“It is important that Cairns city looks vibrant and a place of action.

“As long as numbers are controllable, A-frame signage actually adds to the tourism feel and appearance of the CBD.

“So it is up to the council to control the placement and numbers of signs, not to ban them.” A-GAME: Charlie Woodward, from the CAPTA Group, is hitting out at the clampdown on A frame signs. Pic: Tom Lee

Cr Manning said the council had implemented the policy and was not going to overturn it.

“We didn’t do this lightly,” he said.

“We are not going to change horses mid-stream. The policy is here to stay.”

Mr Woodward said he backed a petition by other tourism operators to lobby the council to repeal the policy.

He was also critical of the lack of consultation by the council and government departments and the “negative impact” of G20 finance meetings.

He said the council and government departments were not adequately consulting businesses throughout the region.

“I feel sorry for the operators around City Place who have had their livelihoods so affected by recent changes,” he said.

“We had a similar experience at the Wildlife Habitat at Port Douglas whereby we were given two days’ notice and then had the main road closed for three months to erect a roundabout and this cost our CaPTA Group hundreds of thousands of dollars.

“The local councils and government departments need to improve their communications and planning to assist local businesses and not treat them with disdain, which appears to be the case in most instances lately.”

“So much is being made of how everything should be spruced up for the G20,” he said.

“To be honest, the G20 will actually have a negative impact on tourism operators. Fewer beds for tourists during G20 equates to fewer passengers on tours and cruises.” THE Cairns Chamber of Commerce is backing a regional council ban on A-frame advertising billboards on footpaths.

“The chamber will continue to work collaboratively, proactively and constructively with CBD businesses and the council to promote a vibrant CBD with streets that are attractive, clean and pleasant to use,” she said.

“We have some terrific opportunities just around the corner, such as ATE and G20. Let’s be ready and show the world what our beautiful city has to offer.”

Commercial property manager Danny Betros said there had been “a massive growth in the number of signs, with operators abusing their use and placing them right in the centre of the footpath outside of their shops.”

He said they looked “cheap, tacky and did nothing for the image of the CBD. The CBD already looks better, clearer and cleaner”.

Publican Ken Harris said the A-frames were a hazard and created a maze for pedestrians to negotiate.

“Personally I don’t like retail stock on footpaths. Bring back the window dressing and merchandising skills to retail and you wouldn’t need to put goods under people’s noses on the footpath. (It) doesn’t add ambience to our tropical city’s pavements,” he said.

Lawyer Nigel Hales said the ban on the signs had already made the CBD “a more pleasant and attractive place to wander around, bringing in more people and therefore more potential customers”.

“Signs and goods on display do not provide vibrancy, people do,” he said.

Pharmacist Nick Loukas said the ban had affected his businesses in the CBD.

“But the removal of stock on the footpaths is a must to raise the overall standard of retailing and ambience of the CBD,” he said.

Shops suffer as signs swept away in Cairns business district NEW PUSH: The council has cracked down on A-frame signs and sunglass/postcard stands outside shops in the CBD. Tusa Dive manager Brian Dale says the move is unfair. Pic: Brendan Francis Source: CairnsPost

COUNCIL’S new policy on footpath trading has had a swift impact with tour operators saying they are already financially suffering less than a week after A-frame signs and stands were banned from outside their CBD shops.

One tour desk operator said his company’s average daily takings fell from $500 to a low of $23 on Wednesday, three days after the shop’s advertising signs and postcard stands were forced indoors.

Cairns Regional Council has adopted a new policy on outdoor trading to clear the streets from commercial clutter and gotten tough on offending businesses flouting the regulations.

After an uproar from local restaurant and cafe owners, Mayor Bob Manning agreed to review the proposed changes targeting dining establishments, but the crackdown on outdoor signage has gone ahead.

Gary Bendall, who runs a tour desk in the CBD, said the attempt to make the streets more attractive to visitors could potentially end up driving them away.

“Some of the streets are just barren and it’s definitely taking the vibrancy away,” he said.

Mr Bendall said removing the signs was making it hard for businesses to attract customers.

“We’re all competing for the same tourist dollar in a pretty difficult and seasonal market,” he said.

“Tour operators are getting angry because they’re finding it hard to promote their items.”

CBD councillor Richie Bates defended the policy, saying the council was set on clearing up the “proliferation” of A-frame signs on footpaths.

Cr Bates said Melbourne’s popular Lygon St dining district was an example of a tourist strip that had been successfully cleaned up without hurting its ability to draw visitors.

“It didn’t stop people going there but it brought structure and discipline and tided the area up,” he said. “We’re not going to deter people from spending money here.”

Association of Marine Park Tourism Operators chief executive Col McKenzie said reef operators had spent a lot of money on outdoor advertising aimed at attracting the scores of tourists who walk through the busy precinct every day.

“The walk-in market is quite large. It’s a major way of getting tourists who haven’t booked anything to be aware of their product,” he said.

“It means they now have to compete with online  quite frankly that’s not how people have marketed their businesses.”

Tusa Dive co-owner Chris Eade, whose shop is on the busy corner of the Esplanade and Shield St, said his company had spent about $110,000 on an awning that it was no longer allowed to use. CAIRNS business owners say they are confused by a new council policy aimed at outdoor trading, and they reckon the guidelines could drive customers away.

Cairns Regional Council’s Best Practice Use of Footpaths Policy will come into effect on January 1.

The council claims the policy aims to improve the “amenity, safety and accessibility of the city”.

Key changes include defining the footpath into pedestrian, trading and kerb zones, reducing goods and signage, and new requirements for footpath dining and furnishings.

Mr Koopman said he was “perplexed” by the changes, which would require outdoor seating to be a minimum of 1m from the kerb and 2m from the front of the shop.

“It will work on some streets definitely, but not others,” he said.

“It should be done on a street-by-street basis, or case-by-case. For us, we don’t want to carry coffees across a walkway, and to put our furniture in the middle  we’re going to get the morning sun, it’s going to kill our breakfast trade.

“I think it’s going to aggravate people, having furniture literally in the middle of the walkway.”

Mr Koopman said he felt the guidelines were geared to suit outdoor trading space at the Esplanade, and expressed a concern that rain would fall on his outdoor customers under the new seating rules.

He said they paid about $250 a quarter to rent the space at the front of the cafe, but were not consulted.

“To have a city, Cairns Regional Council needs small businessbut they don’t do much to help us,” Mr Koopman said.

He said they had also been told by council that its public liability insurance would increase from $10 million to $20 million, which would incur extra cost for the business.

“I’ve measured it up, we’re going to lose quite a bit of space,” he said.

Division 5 councillor Richie Bates said there had been an “extensive” consultation process with businesses but urged concerned traders to follow up with council.

“We have different laws for different parts of the city,” he said.

“The Esplanade certainly was a focus, but we do need to have some rules around the CBD area.

“I would be concerned if we have people who haven’t had that consultation. We know business in the city is very important, our main aim is trying to make it more accessible, more vibrant and more accessible.”