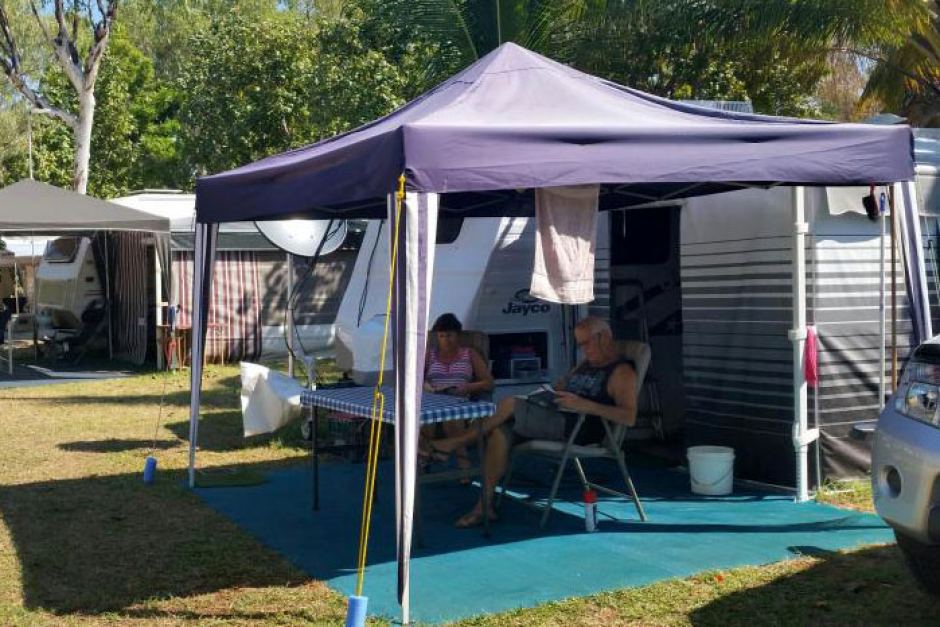 TTN, 22nd May 2014: Grey nomads have gone onto Trevor Chappell’s ABC ‘Overnights’ national radio program to defend their use of public services in remote areas.

The Health Department of Western Australia has issued a warning to the normal volumes of great nomads who will head north for this winter to go to their GP and ensure they have plenty of medication before hitting the road.

In the ABC story below, a regional doctor describes the frequent hazard of patients with serious medical symptoms- including pending heart attacks – presenting at regional hospitals, simply because the travellers have stayed in one spot longer than expected and ran out of preventative medication.

Listeners of ABC radio’s Overnights Program with Trevor Chappell – who of course were only offered the tidbit that ‘grey nomads are a strain on regional communities’ – called to defend the nomads’ contributions to regional towns.

One ‘pre’ grey nomad (a man with a caravan who plans to retire in 5 years), said he spends $2000 a week on the road when he goes away.

Another caller, Laurie, who has been on the road for 5 years, apparently as a single woman, said that in any given town she spends $100 on fuel, $100 on groceries, buy wine and visit cafes. Laurie is a self-funded retiree, and said that the money she spends travelling equates to what she would be spending on a house if she wasn’t a nomad.

Another caller said that seasonal or unpopular work that used to be done by backpackers – fruitpicking and roadhouse staffing and maintentance – is now often done by grey nomads.

Grey nomads are also credited with contributing significantly to communities they visit, particularly in regards to flood relief etc.

One caller suggested there are 500,000 grey nomads on the road at any one time.

This song by classic Australian country music performer John Williamson hs a laugh at the lighter side of being a grey nomad – like purposely parking near a caravan park’s toilets (only to get a dribble when they visit the toilets in the night) but concludes “Oh merry old farts are we.”

Hospitals in Western Australia’s north are being put under strain by travelling retirees who require treatment as they head north for the winter, doctors say.

Thousands of southerners hit the highways in caravans and campers at this time of year in search of winter sun, earning themselves the nickname “grey nomads”.

However, doctors say many of them are heading off without adequate health checks and medication, and end up clogging up the health system in small northern towns.

Rob Whitehead is the Pilbara representative of the Rural Doctors’ Association and works as a GP in Port Hedland.

He said the annual migration north by older travellers increases demand for doctor and hospital services each winter.

“I think it’s great that people can get to see a very special part of Australia, but it does put an added strain on health services that are already over-stretched at times,” he said.

“I think making sure that your health has been checked over by your GP before you leave, is probably a really useful thing to do.”

David Cummins said he had been coming to Broome each dry season for more than a decade.

He said he and his wife Lynn made sure they are fully prepared for the trip.

“It’s fair to say a lot of people in caravan parks are of an aging category, and I’ve known people who, for different reasons, have had to go to the hospital or whatever,” he said.

“Before we come away, we make sure we have our annual check-ups, we go to our GPs and make sure everything’s done, and we fill our scripts if we need to.”

The annual spike in travellers seeking treatment is highlighted in Health Department data.

Emergency department presentations at the Exmouth Hospital jump 50 per cent during the winter months, which requires an extra doctor to be employed.

Leslie Parker is the manager of the Broome Doctors’ Practice and an attendant at the surgery’s reception, putting her at the frontline of the retiree influx.

Ms Parker says the most-common problem is retirees hitting the road without getting a long enough supply of prescription medication.

“The majority are older people who’ve got the time and are travelling at their own pace, so they end up staying longer than planned in some places and they run out of their medications,” she said.

Then there are the travellers who suffer more serious health problems, such as heart attacks.

“People do arrive are in a high-risk position – it could be there’s a pending heart attack,” she said.

“It often happens and it’s usually incidents because of scripts they’ve run out of, or something’s happened that was unforseen.

“There have been a number of times we’ve had to call an ambulance when people have arrived on our doorstop. It can be very scary for people.”

GP services are already stretched in towns like Broome and the urgent health needs of travellers can blow out waiting times for locals.

The Health Department is urging people to have a thorough health check before hitting the road, fill prescriptions ahead of time and ensure their medication is stored appropriately to remain effective in the warmer temperatures.