Gorillas bring the smell of desperation to Sea World 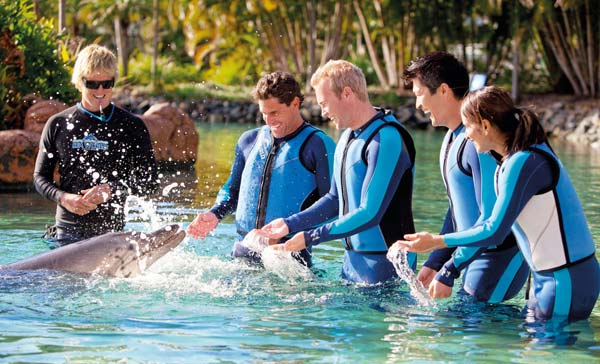 PHOTO: Seaworld Gold Coast offers staff incentive packages. With Australian domestic tourism at record lows, Seaworld on The Gold Coast are resorting to an African exhibition – including Gorillas – to be opened in 2015.

The exhibit, to open in 2015, will include gorillas, hippos, crocodiles and other animals as part of an African encounter attraction.

The gorillas would be sourced from an international breeding program designed to shore up populations of the primate.

Sea World officials were yesterday tightlipped about the project, which is the park’s latest foray away from traditional marine-themed attractions.

An interactive dinosaur attraction was added this year.

A Sea World spokesman said the African safari-style attraction would be an exciting addition to the theme park, which forged its name on dolphin shows and aquarium exhibits.

“We are all excited about a wonderful new attraction which will be a Sea World first, but we’re not able to release any more details just yet,” he said.

Gorilla populations have been decimated, as one of the closest living relatives to humans battles loss of habitat and hunting for sport and meat.

There are about 50,000 gorillas left in the wild and just 600 of the famous mountain gorillas.

Al Mucci, president of the Queensland branch of the Australian Zoo and Aquarium Association, said Sea World’s gorillas could act as pin-ups for the plight of the animals.

“The animals in the exhibit are ambassadors for their cousins in the wild,” he said. “We have seen with the tigers at Dreamworld’s Tiger Island the positive impact this kind of attraction can play in conservation efforts.

“It is also heartening to see a theme park is choosing to spend millions of dollars on an animal exhibit rather than a ride.

“It shows that there is value in this kind of attraction.”

Only three parks in Australia have gorillas and none in Queensland, but it is understood Australia Zoo on the Sunshine Coast has expressed an interest in housing gorillas.