Give them something to do! Party turns violent 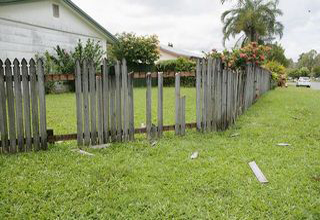 A TERRIFIED woman has told how she could do nothing but get to her knees and pray for safety as booze-fuelled youths rampaged along her street when a weekend party turned violently out of control.

Residents of Cracknell Rdin White Rock say their usually peaceful neighbourhood was woken by loud shouting and swearing in the early hours of yesterday when about 60 teenagers and young adults spilled on to the road from a house party on nearby Yates Court.

Fence palings were torn from their posts and used as weapons, several cars were damaged, front yards were trashed and the street was still littered with alcohol cans and bottles yesterday.

“I was so scared. It was like a riot,” said a resident, who was too fearful to give her name.

“I came out and I asked them to stop because I thought they were going to kill each other.

“The scariest was when they ripped off the fence palings to use as weapons. I just got to my knees and prayed they would stop.”

Police say they were called to the street about 2am and charged two men, aged 20 and 21, with public nuisance.

The men will appear in Cairns Magistrates’ Court next month.

A Cracknell Rd resident said it was the only night of chaos she’d witnessed since moving to the area about seven years ago.

“It was so violent even the dogs in the street weren’t game to bark.”

It was a shocking weekend for southside police, who were earlier called to anotherdrunken street brawl on Robert Rd at Bentley Park, where about 10 people were smashing glasses and fighting.

“There was an assault victim, a 17-year-old male who was unconscious and taken to the Cairns Base Hospital for observation,” Cairns district duty officer Senior Sergeant Michael Bishop said.

“He suffered some form of a whack to the head.”