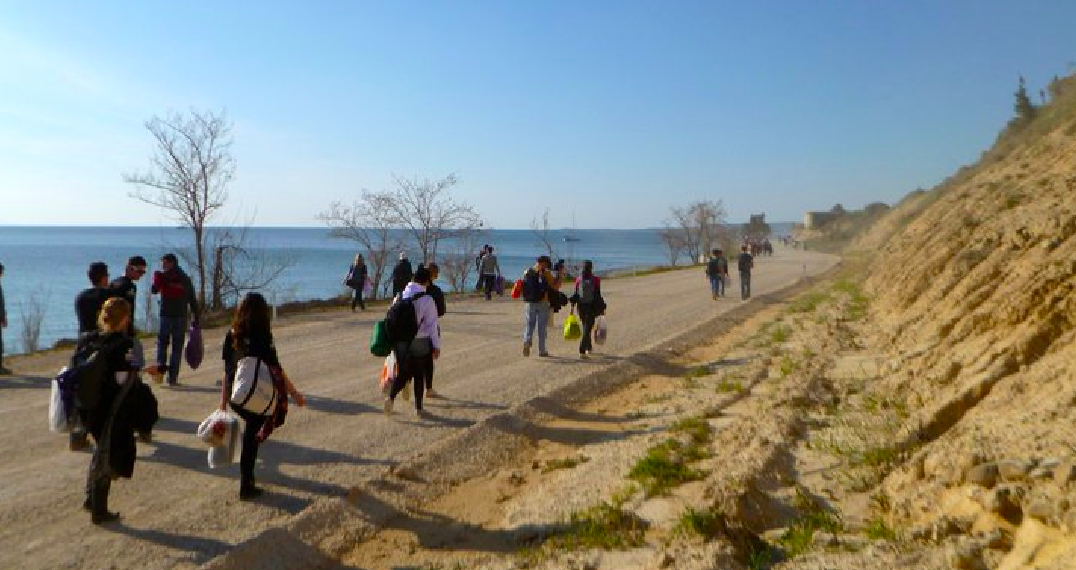 Photo: Anzac Cove. ECEABAT, TURKEY: The Australian government has been unsuccessful in bullying Turkish tourism operators into a ballot system for tickets to the 2015 ANZAC Day celebrations at Gallipoli (Gelibolou) in Turkey.

The Sydney Morning Herald article below quotes an estimate of 10000-12000 people who will observing the service from ships.

Whilst the official ceremony with big screens and controlled sound can be ticketed, the usual dawn-break, still-water view of the Aegean Sea will be filled with dozens of medium-size ships.

In a spectacular failing of international cooperation, Warren Snowdon, a regular at Gallipoli Dawn Service, is fighting to ensure only a privileged few attend, effectively at his discretion.

”Frankly if people have been selling tickets to an event they don’t own, they are acting irresponsibly,” he said. ”It’s misleading, it’s wrong, they should cease it and if they’ve taken money from people, they should give it back.”

Thousands of people who have booked and paid to attend the Anzac Day centenary dawn service in Gallipoli in 2015 stand to miss out because only a restricted number of tickets will be issued via a ballot.

The federal government has warned people not to hand over money to tour operators promising a place at the service before the national ballot closes.

The ballot, to be held between November and January, will allow 8000 Australians, 2000 New Zealanders and 500 ”official representatives” tickets to the 2015 dawn service and the Lone Pine service.

Of the 8000 tickets allocated to Australia, only 3000 double passes will be available to the public.

But travel companies have been taking bookings for tours worth thousands of dollars, guaranteeing attendance to the official services in their itineraries.

Tour operator Paul Murphy says he has more than 1800 bookings on his Military History Tours. On his website the itinerary states the tour includes ”attendance at major services on Anzac Day”.

But Mr Murphy said once people booked they were informed about the ”ballot situation” by the company’s newsletters.

”People don’t buy it off our itinerary, they buy it off the information they get when they book,” he said. ”We started marketing our tour program in 2009.” Veterans Affairs Minister Warren Snowdon warned against buying tickets for the dawn service before the national ballot opens.

”Frankly if people have been selling tickets to an event they don’t own, they are acting irresponsibly,” he said. ”It’s misleading, it’s wrong, they should cease it and if they’ve taken money from people, they should give it back.”

This is the first time there has been a ballot for tickets to Anzac Day services at Gallipoli. During the day there will be ”security to reflect the significance of the event” including checkpoints, X-ray machines and searches for alcohol, a spokeswoman said.

More tourists are likely to participate in private ceremonies on ships anchored in Anzac Cove than be at the official ceremony on land, the founder of Captain’s Choice cruises, Phil Asker, said.

”There will be between 10,000 and 12,000 people docked on ships,” he said. ”A lot of people will miss out on Anzac Cove or North Beach for the actual dawn service because that is obviously going to be well and truly limited, and probably correctly so.”

Owner of Battlefield Tours Mat McLachlan is also setting up his own commemoration at ”a spot not far away from the site”. ”I thought there were better ways to handle it than a ballot but it has been the case for a long time now,” he said. ”There have been some issues with companies who simply told people that they would be at the dawn service.”

The Department of Veterans Affairs will conduct a campaign before the event to discourage people from showing up without a ticket.