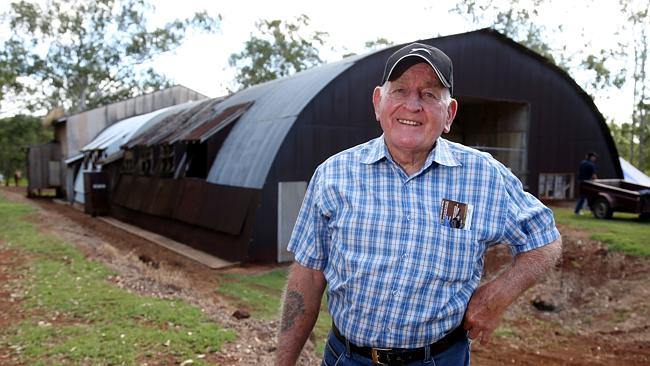 (Cairns Post caption) WAR HISTORY: Launch of a $1.5 million fundraising campaign to restore a Rocky Creek WWI igloo on the Tableland to its former glory. Bill Frazer’s family purchased the igloo in 1947. Bill was 10 years old when they moved in. PICTURE: STEWART MCLEAN

A HISTORIC war site on the Atherton Tableland is on its way to resurrection after the launch of an ambitious campaign to raise $1.5 million.

Hundreds visited the dilapidated Rocky Creek Hospital war igloo on Saturday, marking the started of an 18-month plan to restore the WWII structure to its former glory.

The igloo was used as an entertainment precinct by Australian military personnel who were processed at the hospital throughout the war.

Atherton Rotary Club is driving a project to refurbish the site and resume community functions there and establish a military museum.

An Igloo committee has been established and secretary Jo Barnes said more than $3000 was raised and thousands more pledged at the launch.

Money was generated through raffles and donations, and Mrs Barnes said organisers were pleased to see strong support for the project.

“We really want to extend the fundraising effort right across Australia,” she said.

“We need to keep getting the money in to keep the whole project going, so that we can start to realise the memories of the igloo.”

About 100,000 military personnel were stationed at the Tableland at the height of the Pacific War between 1943 and 1945, as the Japanese threatened to invade Australia.

The 5000-bed Rocky Creek Hospital processed about 60,000 soldiers, many of whom enjoyed plays, pictures, concerts and mass services inside the Rocky Creek entertainment igloo.

Queensland Senator James McGrath has been appointed patron of the project. He attended Saturday’s launch on behalf of Prime Minister Tony Abbott and Minister for Veterans Affairs Michael Ronaldson.

The Igloo committee is now planning further fundraising events and applying for government grants to help fund the project.

Donations can be made by searching for “Rotary Club of Atherton” at frrr.org.au

TTN note: The caption from Cairns Post (top) also describes how Bill Frazer’s family purchased the igloo in 1947, and that Bill was 10 years old when the family moved in.