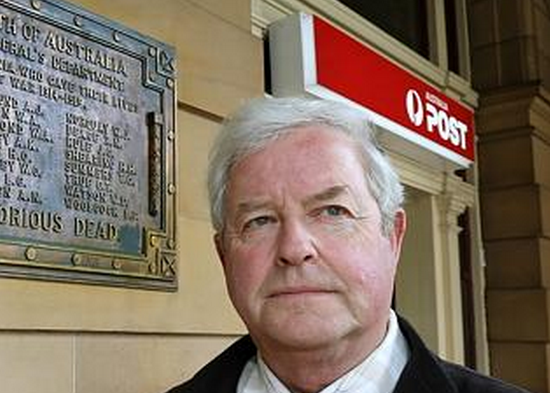 Historian Reg Watson in front of World War I honour roll at the GPO. (Photo from News Ltd.)

A HISTORIAN’S suggestion to build a convict wall on the Macquarie Point site, to give locals and tourists a free focal point to discover Tasmania’s penal history, is gaining traction.

Professor Henry Reynolds’ idea of a wall bearing the names of all convicts sent to Tasmania has been backed by another historian.

The body overseeing the development of Macquarie Point says all ideas needed to fit with the principles that underpinned its recently released shared vision.

Prof Reynolds suggested at the weekend it was time for Hobart to pay tribute to its convict ancestors.

He said the convict wall could become a place of pilgrimage for the hundreds of families from both here and the mainland who had at least one Van Diemen’s Land convict ancestor.

“The use of the vacant land at Macquarie Point, in this instance the recording of our convict history, is an excellent one.” he said yesterday.

“I would suggest that three-quarters of Tasmanians would have a convict ancestor somewhere in their line.”

Mr Watson said there had been some “nasty” development in Tasmania over the decades, including Hobart’s wharf area.

He said Macquarie Point would be a good location for such a tribute.

“Port Arthur has now been captured commercially with accessibility only if you can pay for it,” he said.

“That is a bane of contention with me. Macquarie Point could be free for all.”

Ms Jack said she would not discount any ideas for development on Macquarie Point at this early stage of the planning process but added that all proposals had to fit the corporation’s vision.

“These principles include, among other things, the need to involve a mix of uses, to respect the site’s history and be people-focused. Whatever developments finally make up the overall site mix, they will need to be complementary, well-thought through and privately or publicly funded,” she said.