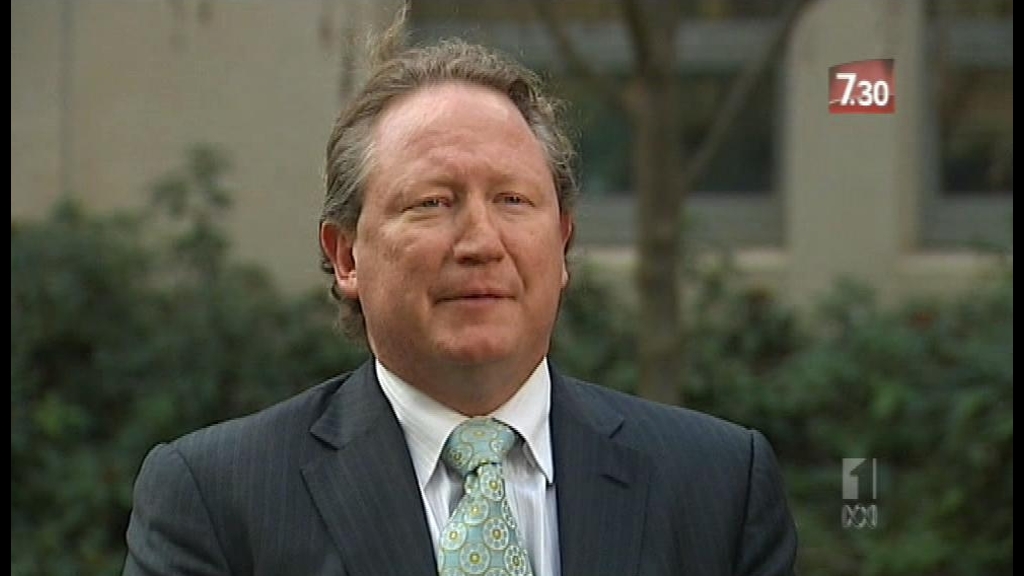 TTN: IMAGE: Andrew Forrest on ABCTV’s 7.30. Mining magnate Andrew Forrest has said Fringe Benefits Tax “is really forcing people to only invest in one house which is therefore in one city, which therefore populates a one-city policy (across WA).”

BILLIONAIRE Andrew Forrest is confident the WA economy will remain strong and says people eager to “write off” China have got it wrong.

In a wide-ranging interview with The Sunday Times as Fortescue Metals Group prepares to celebrate its tenth anniversary this month, Mr Forrest said:

– Belts would tighten in the next year, but West Australians shouldn’t panic.
– Governments needed to stop being so Perth-centric and commit to investing in regional cities in areas such as the Pilbara.
– Outdated housing taxes were tearing fly-in, fly-out families apart.
– The future of Fortescue was in good hands without him; and
– His achievements would mean nothing if they came at the expense of his family.

THE ECONOMY
Despite the almost daily reports of mining companies laying off staff, Mr Forrest said WA was not heading into a recession.

“I think every reader of The Sunday Times should be looking at the next year as being a bumpy ride, but looking at it with confidence,” he said.

“It’s not going to be a bad year – it just won’t be a spectacular year. But, it will precede a strong WA economy and you will not see the WA economy slip back.

“Belts will tighten everywhere, but WA will still be one of, if not the greatest state you can choose to live in.”

Mr Forrest said commentators, such as Prime Minister Kevin Rudd who recently declared “the Chinese resources boom is over”, were wrong.

“We’ve had China written off so many times in the 10 years of Fortescue’s history and in the 20 years I’ve been fascinated by China,” he said.

“The Chinese don’t write themselves off – Western commentators do that.

“I have listened very carefully to what the Chinese leadership have said.

“They have a number of things going for them; several hundred million people they’ve still got to take out of poverty, huge foreign reserves and a rapidly educated people who are all ambitious. That gives them a serious weapon.”

Mr Forrest said the aspirations of the Chinese people reminded him of Australians.

“There is no ingrained social dysfunctionality or traditional set poverty like you have in other countries,” he said.

“In many ways it’s got an Australian, `Get up and have a crack mate’ style culture.”

Mr Forrest said he received hundreds of emails from families thanking FMG for its eight-day on, six-day off family friendly roster.

But he also got emails from parents saying FIFO work had destroyed their families.

In one recent email, a woman told him her 15-year marriage had broken down because of it.

“We were the absolute first to move to an 8-6 roster in the Pilbara.”

Mr Forrest said the taxation system robbed mums and dads of the “security” of living in their own home by penalising them if they bought a second house near a mine site.

Fortescue is calling for Fringe Benefits Tax imposts on remote area benefits to be scrapped and more land to be made available for housing developments in the Pilbara.

“We’ve got this antiquated taxation system, which is really forcing people to only invest in one house which is therefore in one city, which therefore populates a one-city policy (across WA),” he said.

“We really need to change taxation policy so that it is not skewed against owning more than one house.”

Mr Forrest said WA had to realise there was room for other major cities outside of Perth and called on governments to be more courageous when funding and planning for regional areas.

“It’s a state with fabulous growth potential, extremely interesting coastline, beautiful climate and serious economic reasons why it can afford to decentralise its population,” he said.

“We do need an attitude of leadership in our government which demonstrates faith in major population centres outside of Perth.”

Mr Forrest stepped down as FMG chief executive in 2011 to become chairman and was replaced by Nev Power.
He said the company was doing well “rowing without me”.

“The strength of Fortescue has always been its management team,” Mr Forrest said. “We’ve had to explore ground where others have found nothing and with different techniques.

“We’ve pushed through the cynicism and ridicule of opposition of the established players.

“In my view, the best that I could do was to fully utilise what has always been Fortescue’s real strength… an excellent management team.”

FAMILY
Mr Forrest said his business success would have been hollow if it had come at the expense of his family.

“I will always put family first,” he said. “Every time I haven’t, I have regretted it and apologised.”

Mr Forrest said he wouldn’t force his three children, the oldest of whom is 19, to enter the company.

“It’s entirely up to them. They might go into things entirely different (to me),” he said. “I have no expectations just the hope they will be happy.”

Mr Forrest and his wife, Nicola, were the first Australians to pledge the “vast majority” of their wealth to charity after joining a philanthropic movement launched by Microsoft founder Bill Gates and legendary US investor Warren Buffett.

“I’m never looking at life in terms of legacy,” he said.

“I’m very occupied by the present and how we can help today.”

The third part of the series with Andrew Forrest will be published on PerthNow tomorrow.