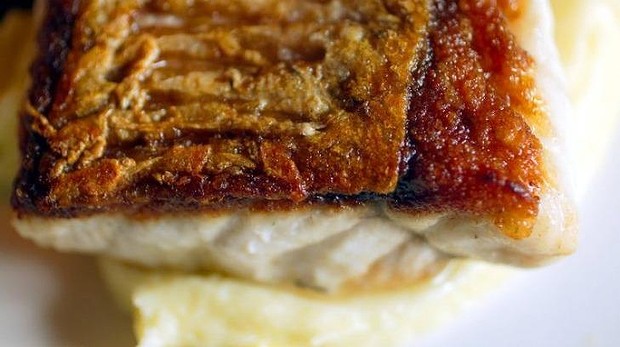 Backers of food labelling legislation are gaining momentum as restaurants in France are outlawed from claiming their food is home-made unless all food (with some exceptions) is made in-house. Australian meat and seafood industries are suffering a comparable quality/identity crisis – whilst almost all Australian consumers assume barramundi they consume in restaurants is Australian ‘grown’, only 40% of it is.

From Fairfax’s Good Food, 3rd July 2014
Most diners wrongly assume the seafood they are served in restaurants comes are fished from Australian waters, and need to be “protected from deception”, the seafood industry says.
Nearly three-quarters of the seafood consumed by Australians is shipped from overseas, leading seafood producers told a parliamentary committee examining country of origin labelling laws.In the case of barramundi, a national favourite, 60 per cent of the 20,000 tonnes savoured by Australians each year is sourced from foreign fisheries, research by the Australian Barramundi Farmers Association showed.

Raw prawns: seafood consumed locally is “assumed by the consumer to be Australian product”.

The heads of four major seafood bodies, including the National Seafood Industry Alliance, want seafood labelling laws to be  extended to the restaurant industry, which is exempt.

Country of origin information should be published next to seafood dishes on menus so that consumers can be “protected from deception”, they said.

“When people order barramundi, they just think it’s Australian,” said Scott Wiseman of the Seafood Industry Alliance. “There’s a requirement to know the fish species, but not whether it’s Australian. They have the right to make a full purchasing decision.”

Confusion also runs rampant with popular seafood such as red emperor, whiting, flathead, Spanish mackerel, prawns and squid, the Northern Territory Seafood Council said. “This list goes on, all species produced within Australia and assumed by the consumer to be Australian product.”

But John Hart, chief executive of the Restaurant and Catering industry group, said  it would be “onerous and expensive” for eateries to provide the information.

“It would cost $300 million per annum to introduce such a change,” he told the committee, referring to costs linked with updating menus, reconfiguring back-end systems and maintaining compliance. “The menu would read more like a book, having labelling provisions for every ingredient.”

Restaurateurs seldom, if at all, specified which country they wanted their seafood from when placing orders with suppliers, he said.

Helen Jenkins of the Australian Prawn Farmers Association said the Northern Territory had successfully applied labelling of origin laws to all its food sectors, including restaurants, in 2008. It remains the only jurisdiction to do so.

“It’s time for uniformity across Australia,” she said. “We’d like it to be legislated.”

Mr Hart from Restaurant and Catering conceded that the NT law had become accepted after “a rocky road to start with”, but firmly rejected the call for a nationwide rollout.

He said research of dining behaviour showed the country of origin of a product did not feature among the top factors that swayed purchasing decisions.

“We ranked a number of different factors, included origin, local produce, nutritional content. They were the eighth, ninth order issues. Primary order issue was the quality of product,” he said. 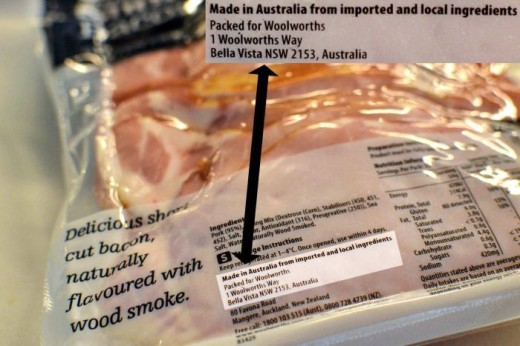 Australian pork producers say their industry is being undermined by weak labelling laws that make it easy for foreign pig meat to be portrayed as home-grown.

“Labelling makes it really confusing for our consumers to even identify Australian-grown bacon,” he told Landline.

“People don’t understand when they’re eating bacon there’s a very large chance it has come from a pig grown on the other side of the world.”

The industry is calling on the Federal Government to make tougher laws that more clearly identify the country of origin.

“Under the [current] laws bacon made from pork imported from Denmark can be labelled as made in Australia, and that’s because there’s a lot of value-add [that] happens here through the curing, the cooking, the slicing and the packaging,” Mr Spencer said.

“The writing on some of the imported product is so small you can’t read it,” Mr Jones said.

Australians on average eat 6.3 kilograms of bacon a year, but APL says consumers are unaware more than 75 per cent of bacon sold in Australia is made from imported product.

Local producers are attempting to stem the flood of cheap bacon imports by promoting APL’s pink pork-mark label which guarantees a product is Australian.

Mr Spencer says half of consumers now recognise this branding.

“Some of the large smallgoods manufacturers still haven’t taken up that pork-mark, perhaps because they sell a lot of products made of imported pork,” he said

“That is one of our milestones for the future – to get the pork-mark on some of those bigger brands.

“But it does seem to be making a difference and I think it’s helping consumers make choices to support Australian farmers.”

Apart from labelling, many Australian pork producers believe the best response to cheap bacon imports is for the local product to go upmarket.

While they can not compete on price, Australian bacon producers argue they can outdo their overseas competitors on quality, in much the same way local coffee, olive oil and cheese producers have done.

Consequently, there has been a marked increase in the number of artisan smokehouses and traditional smallgoods companies in Australia.

TTN note on the below portion of ABC story

TTN: Please note, the below portion of this story was included in the ABC Landline story about food labelling. The below is blatant PR – the ABC are not supposed to be mentioning brands in their reporting. When aggregating this Tourism News post, the Tourism News tweeted (send a message via Twitter) to the ABC:

“R @abclandline+@ABCRural exempt from @abcnews‘ policy against promoting brands? 70% of their content is branded. Disinformation is dangerous”

“Once you taste the difference between it and the regular run-of-the-mill bacon, [which is] made from imported frozen pork, I don’t think there’s any comparison,” Mr Curry said.

This year’s competition had more entries than any of the previous five years.

Mr Curry says despite the price of Pialligo Farms’ bacon he sells a tonne a week.

“I’m all about sourcing locally and doing it the old traditional way without injecting or pumping and everything else,” he said.

“I think this is the reason everyone complains about bacon, because it’s not done the proper traditional way.”

Victorian company Bertocchi Smallgoods won the award for Australia’s best bacon available nationally for a new line it has developed for Coles.

“We saw it as an opportunity to sell a premium-quality bacon which we believe is lacking in the supermarkets today,” Bertocchi’s Frank Di Virgilio said.

Despite using Australian pork, which is 30 per cent more expensive than imported product, companies like Bertocchi and Pialligo are finding customers will pay more for bacon they know is Australian.

“Twenty-five to 30 per cent of the market will pay for it. If we can target and get that market I am very happy with that,” Mr Curry said.

“The meat hasn’t been frozen, it hasn’t travelled across the world,” he said.

“It has all of those attributes of freshness that gives it a platform for once it’s cooked, and it’s going to taste a lot better than the imported offering.

“It’s consistent with how we see the pork we grow in Australia of being very high quality. It’s really suited to high-end food service or high-end restaurants.”

See the full story on ABC TV’s Landline at noon on Sunday.

Food lovers may put France on a pedestal, but microwaved or pre-packaged dishes have become so common in restaurants that authorities are introducing a new “homemade” label for chefs cooking meals from scratch.

From Tuesday, French restaurants will be able to hang up a “homemade” logo for all to see if the in-house chef makes everything him- or herself, or next to specific dishes on the menu, according to a decree published Sunday in the official government gazette.

The move comes in response to concerns that the country’s prized gastronomic reputation is being damaged by substandard eateries as many restaurants serve boil-in-a-bag or microwaved ready meals as restaurant-quality cuisine.

“The aim of this decree is to recognise the act of cooking, recognise a know-how… by giving the consumer simple and reliable information,” Consumer Affairs Minister Carole Delga said.

Much of the decree centres on what products can be used – and how – to qualify for the “homemade” label.

The decree says raw products that have already been frozen, refrigerated, cut up, ground, smoked, or peeled by the time they are delivered to the restaurant, apart from potatoes, qualify for the distinction.

Exceptions are made for some prepared products such as bread, pasta, cheese and wine.

The GNI trade organisation that represents 260,000 workers in the restaurant and hotel industry welcomed the move.

The decree aims for “the right balance between promoting our trade and customers’ desire for transparence,” it said.

The move is just one of several attempts over the past years to address what many see as the declining standards of France’s famed restaurants.

The culinary group – which counts members such as Alain Ducasse, Joel Robuchon and Guy Savoy – grants the label to deserving restaurants and makes sure standards are maintained through online client surveys.

Many websites are also cropping up in France to advise consumers on restaurants where food is prepared in-house.