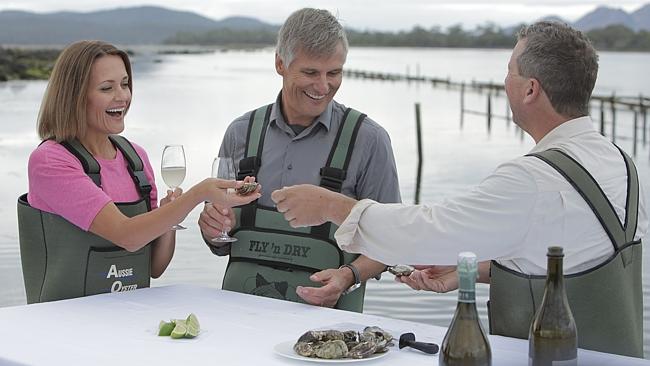 The advertisement features a couple wearing waders, standing at a table in the water, shucking oysters and sipping champagne. Mr Giles was thrilled to be included in the latest instalment of the “There’s Nothing Like Australia” campaign.

“It’s possible to eat an oyster at the farm shop that has been out of the water for no more than 20 minutes,” he said. Preparing one of the world’s freshest oysters at Freycinet. Source: Supplied

The Freycinet segment is one of eight new scenes in the campaign, set to screen in about 20 key international markets.

“Restaurant Australia is all about bringing together passionate locals … to demonstrate what makes Australia’s food and wine experiences so unique and distinctive,” he said.

“Shucking fresh Tasmanian oysters … against the spectacular backdrop of the Hazards certainly ticks those boxes and provides a compelling chapter for us to share as part of Australia’s food and wine story.”