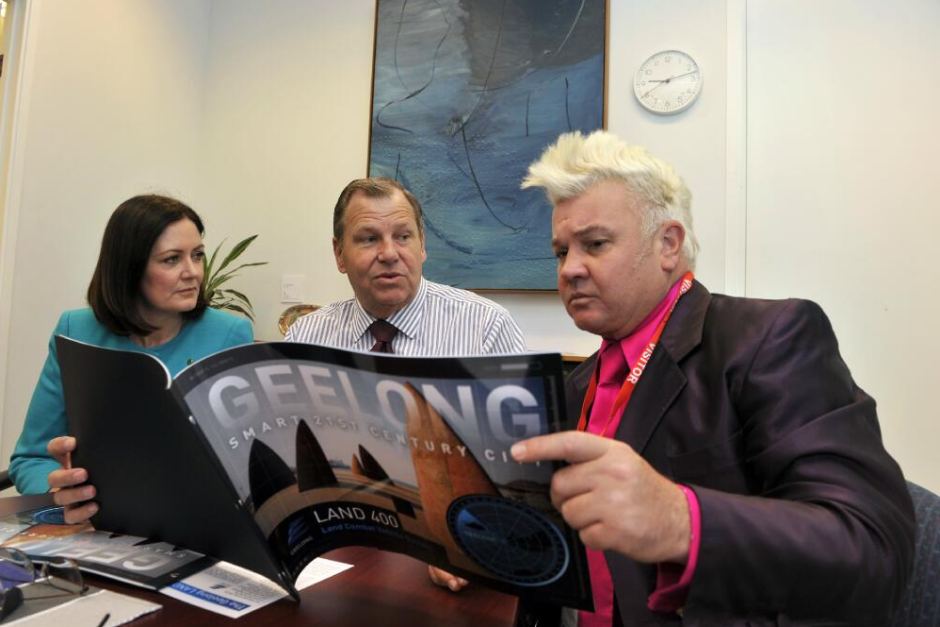 GEELONG Vic.’s Mayor Darren Lyons has found a way to push his region’s agenda – all the way to Canberra. This time he’s lobbying for defence building contracts for his regions.

The mayor made national headlines in January talking up the value of tourism in Geelong. See Darryn Lyons’ tourism campaign from 31st January here.

Councillor Lyons is lobbying for Geelong to secure the $10 billion contract to design and build the Land 400 military combat vehicles.

He met with representatives from the Department of Defence and advisers to Prime Minister Tony Abbott as well as local MPs.

Geelong’s economy is in transition after the announcement of job losses at Ford and a decision is expected soon about whether Alcoa continue operating its aluminium smelter at Point Henry.

Councillor Lyons says the bid will face stiff competition from other consortiums, particularly in South Australia, which is also facing job losses in the manufacturing sector.

But he says Geelong is the best place for the work.

“It’s very close to Puckapunyal, we’ve got Deakin University, it has all the systems in place in terms of Avalon, it has the ports and of course in terms of the motoring sector, the biggest in Australia.

“So, as we’ve got to look to smart engineering and smart manufacturing capabilities which are already starting in Geelong, this is really to build on that.”

He said the contract could bring 1,000 jobs to the city.

“We’ve got to look to the future. We are in a rebuilding stage,” he said.

“I want to build and service these tanks and design them and sell the IP around the world to bring GDP into Australia.

“This is where we create jobs for the future. These are very different jobs to traditional manufacturing.

“This is the future of manufacturing which Geelong is leading.”

Photo: Darryn Lyons all dressed up to lobby for the lucrative contracts. (ABC News)

The Land 400 is a $10 billion design and manufacturing program along with a $10 billion maintenance program, funded by the Federal Government’s defence capability plan.

Before heading to Canberra, the colourful mayor posed for a photograph on the front page of the Geelong Advertiser, dressed in military fatigues and a tin hat.

Alcoa future also on the agenda

Councillor Lyons also discussed the future of Alcoa with advisers to the Prime Minister.

“As far as Alcoa’s concerned, and for the families and friends there, as far as I’m concerned, no news is bad news,” he said.

“I’ve got close friends who’ve been there for many years and the workers aren’t really being spoken to and that is to me a very bad sign.”

He said the defence contract bid is part of the city preparing for life after the announcement.

“Any leader of any city would say I’d love to give great news, but we’ve made pressing telephone calls and letters and the system is still exactly the same.”

A spokesperson from Alcoa says the company is yet to make a decision on its Point Henry smelter.