First right of reply as reward for 17 yrs of failing 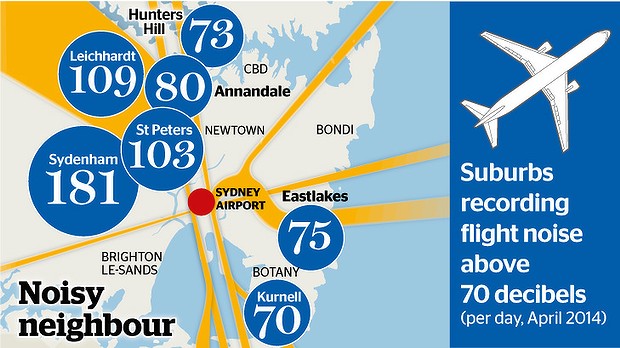 TTN: Recently it was announced that Sydney Airport Corporation (SAC) would have first right of reply in the construction of a second Sydney Airport. Not only has SAC found to have been cooking the books in 2013 to appear unprofitable, but the Sydney Morning Herald has revealed that SAC has missed their noise targets to the detriment of Sydney residents – for the last 17 consecutive years. Sydney Airport’s monopoly currently traffics over 50% of all inbound tourists to Australia.

Sydney Airport has failed to meet its aircraft noise-sharing targets every year since they were set 17 years ago, with suburbs immediately to its north bearing up to double the number of planes set by the airport’s operating plan as ”fair”.

Under targets set in Sydney Airport’s long-term operating plan, suburbs north of Mascot are supposed to have 17 per cent of aircraft movements – planes landing and taking off – overhead.

Instead, those areas have had more than 30 per cent of flights every month for the past three years, and regularly have more than double the target.

Suburbs north of the airport are most affected.

The number of planes flying over suburbs north of the airport is steadily increasing, and will rise further as newer, larger planes use Kingsford-Smith and the airport grows busier.

Sydney Airport has two north-south runways, and only one running east-west. During busy times air traffic controllers are compelled to use the parallel runways, putting more planes over suburbs south and north of the airport.

“During peak periods when aircraft numbers are high, and when weather conditions allow, air traffic controllers use both parallel runways, allowing for a greater throughput of traffic. During these periods, it is not possible to use the cross [east-west] runway,” an Airservices Australia spokesperson said.

Government modelling shows that by 2020, there will be no unused slots for aircraft movements during peak times, and by 2027, no

free slots at any time of day. At full capacity, Sydney airport’s ability to use the east-west runway will be reduced even further. Larger planes can only use the longer north-south runway.

In 1996, in response to growing public pressure over aircraft noise, the government regulator ”developed options for operating the airport in a way that shares the noise as fairly as possible”.

Monthly flight data shows Sydney Airport has never met these targets. Operating plan documents say the non-binding targets were calculated using computer modelling and “have yet to be proven in practice”.

In 2012, an independent steering committee recommended the airport’s noise-sharing arrangements be reviewed and updated. That was rejected by government.

While flights to the north consistently exceed the target, flights to the south and west are universally below – the west often gets only 1 per cent of all flights.

A Sydney Airport spokesperson said the airport worked closely with communities to mitigate noise, especially in suburbs close to the airport. “We continue to invest in infrastructure to facilitate new generation, quieter aircraft such as the A380 … new generation aircraft coming off the production line today are about 75 per cent quieter than they were 40 years ago.”

Sydney Airport’s three runways can be used in 10 configurations for planes. Airservices Australia told Fairfax: “Safety is our first priority when managing aircraft movements.” Wind, rain, and aircraft type determine which runway a plane can use.

Airservices Australia monitors aircraft noise over Sydney suburbs, registering the number of planes louder than 70Db at street level. Seventy decibels is comparable to a vacuum cleaner, a lawnmower, or the noise of freeway traffic from 15 metres.

The suburbs most affected are those immediately north of the airport. This year, Sydenham has had, on average, 172 planes a day louder than 70Db. Leichhardt has had 102, St Peters 98, and Annandale 69.

The Kurnell Peninsula has averaged 77 planes a day above the 70dB threshold in 2014.

In George Street, Sydenham, Carl Ruhinda said the noise was “unbelievable, the planes feel like they are just above your head”.

”I run an online business from home and if I am on the phone when a plane comes over, we can’t hear anything at all. Even if there are two people inside the house, you can’t speak. The planes are … very disruptive.”

He said neighbours had moved because of the planes.