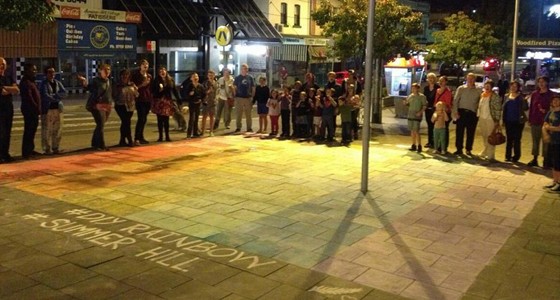 TTN: The first permanent rainbow crossing in NSW has been authorised by Ashfield Council. “The crossing represents diversity and inclusiveness [in] the inner west,”  Council representative Kate Wake said.

LGBT restaurant consumption has been discussed as a way to spread Sydney’s night-time economy to outer-suburbs.

Contention over rainbow crossings spread in April after a popular Sydney rainbow crossing, laid down for Mardi Gras, was removed as planned by the City of Sydney council. Chalk versions appeared across the city in a symbolic show of support for gay rights.

The first permanent rainbow crossing in NSW has been authorised by Ashfield Council during its meeting on Tuesday night.

Local residents were ecstatic over the approval.

“I’m in shock,” said the organiser of the “DIY” crossing, Kate Wake.

Ms Wake said the majority of Ashfield councillors approved a permanent outline for the colourful crossing, where locals and visitors could write messages in chalk.

“The crossing represents diversity and inclusiveness [in] the inner west,” she said.

“It acknowledges the Lesbian, Gay, Bisexual, Transgender and Intersex community, which is shaping the inner west”.

The crossing has recently become a meeting point and a “topic of discussion” in the local community, Ms Wake said.

“I’m proud of the families and businesses who campaigned.

“We just want to make sure it’s safe.”

It has been a long battle for the crossing to be approved, after council workers twice removed the chalk-drawn rainbow this year.

The decision comes after the Oxford Street Rainbow was controversially removed in April because it was considered a safety risk by the Roads Minister Duncan Gay, after people were seen lying down in the street and taking photographs.

The crossing’s removal sparked a trend of chalking a copy of the rainbow symbol outside businesses across Sydney to show support for equal rights.

On Saturday over 500 people grabbed a multi-coloured piece of chalk and marched from Town Hall to Taylor Square in a mass rally to voice their opposition against homophobia. 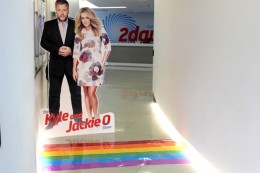 Ashfield Council has confirmed its council officers have hosed away chalk rainbow crossings at Summer Hill.

The crossings are popping up as part of a protest against the state government removing the crossing on Oxford Street last week.

Below is the full statement the council have issued.

Ashfield Council received reports this morning of unauthorised markings on the roadway and across a public footpath at Summer Hill.

Council was concerned that the markings on the road presented a risk by distracting drivers and removed the marking.  No permission is ever granted for non-traffic related markings being placed on roadways.

Council also removed chalk markings from a public footpath as it presented a potential slip hazard safety risk to pedestrians, particularly for elderly and disabled residents in the community.

Ashfield Council has a Street Entertainment Policy that includes pavement visual art.
For $5.00 pavement and visual artists can apply for a three month permit. The policy ensure that public safety and amenity is taken into account while supporting the rights of individuals to express themselves across a range of artforms.