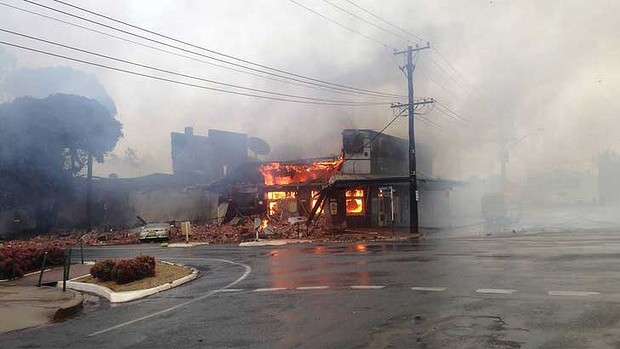 The close-knit community of Cobar is “shell-shocked” after a much-respected firefighter died while tackling a blaze at a hotel on Sunday morning.

Daniel Howard, 37, suffered a cardiac arrest after a wall collapsed on him and a fellow firefighter at the New Occidental Hotel on Marshall Street at about 9am.

“We’re shell-shocked. The hotel building being on fire was big news this morning, it’s a big loss. But it completely left everybody’s mind when we heard about Daniel,” said local councillor Tracey Kings. “Everyone is so overwhelmingly sad.”

Mr Howard, also an electrical contractor, was “community-minded” and “big-hearted”, known for being generous at many fundraising events of the central western NSW town.

He had recently sung a Beyonce song with several friends at an event to support a young couple whose daughter had perished in a fire, she said.

And a couple of years earlier, he had lent his unpolished vocals at an It Takes Two contest to raise funds to restore a vandalised cemetery.

“Daniel was the non-singer, but he gave it his best. He was a lot of fun,” Ms Kings said. “He was in every way possible a good bloke.”

He recently got engaged, she added. His Howie’s Electrical business was a sponsor of the Cobar Camels Rugby Club.

Police have set up a crime scene at the New Occidental Hotel, which they say “sustained extensive damage”. The second firefighter is being treated for a broken arm at Cobar Hospital.

Investigations are continuing into the cause of the fire, and police have appealed to the public for help.

“Police would like to speak with a man who was seen filming the fire on a camera. It’s believed the footage could assist with the investigation,” a statement reads.

Detectives are preparing a report for the coroner. WorkCover has also been notified about the incident.

Minister for Emergency Services Stuart Ayres paid tribute, saying Mr Howard had selflessly dedicated his life to the safety of his community as a firefighter.

“Daniel was doing what we ask firefighters to do every day, day in, day out – to run into buildings that are on fire, not to run out of them, to call on people and to help people when they’re in their darkest hour and their time of need,” he told Nine News.

Mr Howard had stayed at home this weekend, because there was no one else on call, Mr Ayers revealed.

“Three people owe their lives to the response from Daniel and his team today who may have lost their lives had Daniel not chosen to stay on call.”

Fire & Rescue NSW Commissioner Greg Mullins said the death of Mr Howard was a loss to the entire firefighting community.

“He lost his life protecting other people in his community and on behalf of all members of Fire & Rescue NSW I extend our deepest sympathies to firefighters, family and friends.”

Crews were called to the inn at 8am following reports the building was alight. Ten people who had been inside the building were accounted for. About an hour later, the wall collapsed onto the two officers.

Cobar mayor Lilliane Brady called Mr Howard a “gorgeous young man, a beautiful and brave one that I felt honoured to know.” His death was a “big loss… he was a real asset to the community.”

Linda Carter, a former councillor and manager of Cobar’s RSL club, which sits opposite the New Occidental, said the fire took hold of the entire pub within 20 minutes.

“It was just starting when I arrived at work this morning, at about five to eight. There were two cleaners from the club banging on the windows to get people out.

“You couldn’t see a block ahead, the smoke was so thick and the smell … it was a really old building, full of timber. It was one of the original pubs.”

The pub, she said, was the first sight visitors would see when they entered the town and had recently undergone a refurbishment.

“It’s a sad day. It’s an iconic part of the history of Cobar gone,” she said.

“Our deepest thoughts and sympathies go out to Daniel’s family, friends and colleagues. Another firefighter was injured during the fire, here’s hoping he makes a full recovery,” the post reads.

Glenbrook Fire Station extended its “deepest condolences to the family, friends and colleagues of our comrade, who paid the ultimate sacrifice.”

A large part of the Cobar’s main street has had its electricity cut off and is closed for business.