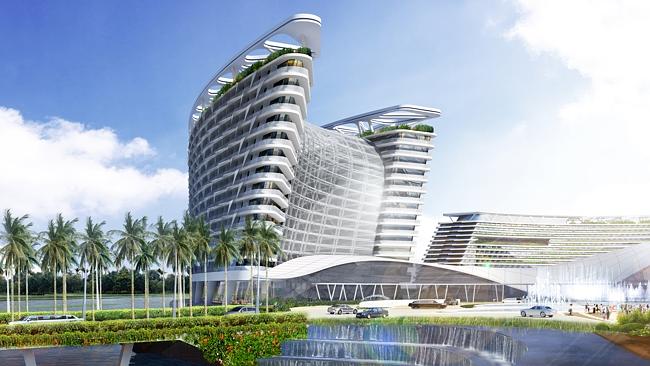 An entire catalogue of news stories demonstrating the Cairns Posts’ submission to Aquis’ PR can be found here.

TTN, 7th June 2014: Whilst the Aquis team have taken their PR campaign global, Cairns business owners and residents are still wondering if the Aquis development will be an environmental and cultural monstrosity built on an out of town-flood plain. There are hopes the QLD Government and Cairns Council can ease the $8.1b into a more palatable cash injection that will turn a tourist town into pivotal tourism capital.

This headline tops a lengthy 1400-word article in the influential The Washington Post about Cairns and the $8.15 billion Aquis integrated resort and casinos.

“Once a stop on the hippie trail, Cairns is now a haven for backpackers and divers. By 2019, (Hong Kong tycoon) Tony Fung predicts it’ll be a gambling destination to rival Macau,’’ the story by the Bloomberg news service says.

“With targeted first-stage completion in late 2018 and 7500 hotel rooms around an artificial lagoon, 18-hole golf course and water park, it’ll nearly triple the region’s hotel accommodations and be bigger than Singapore’s two casino resorts put together.’’

Justin Fung, Tony’s son and chief executive of development company Aquis Resort at the Great Barrier Reef Pty, said: “We are extremely confident that Cairns can be a global destination.

“This is the closest western city to China.” An artist’s impression of the main entrance of the $8.15 billion Aquis Great Barrier Reef Resort at Yorkeys Knob. Source: Supplied

The story says Fung’s quest faces competition across the region as investors locked out of Macau, which has licensed just six casino operators to tap its $45 billion gambling market, plan new resorts from Sri Lanka to South Korea, the Philippines and Japan.

With Chinese spending on overseas trips rising 26 per cent last year to $129 billion, the country is already the world’s largest source of outbound tourist revenue.

The hotels helped fuel a 20 per cent jump in tourist numbers to the city-state after they opened in 2010, he said. Killian Murphy, an analyst at CIMB Group Holdings Bhd, told Bloomberg: “Everyone’s seen the success of Singapore, which is just being used as a blueprint elsewhere.

“Potentially Australia as a whole becomes a better sell into the Chinese market if it has more resorts for tourists to choose from.’’

Justin Fung told Bloomberg that Cairns was well placed to exploit that market with another Fung family company already buying about 77 per cent of the Reef Casino Trust as part of a $269 million takeover.

“We’re sitting on the doorstep of the Great Barrier Reef,” he said.

“As the Chinese middle-class and wealthy travel, one of the first things they’re going to embrace is the natural environment.

“Cairns has that in spades.”

But the story says not everyone welcomes the proposed development.

“Most likely it’s going to sit there and moulder and just be a headache.”

The report says Hannah lived on communes in the hills behind Cairns in the early 1970s.

“People had the good old peace, love and brown rice philosophy,” she said.

It noted she became friends with former US presidential candidate Howard Dean’s younger brother Charlie while working on a organic farm in the region set up by three other Americans.