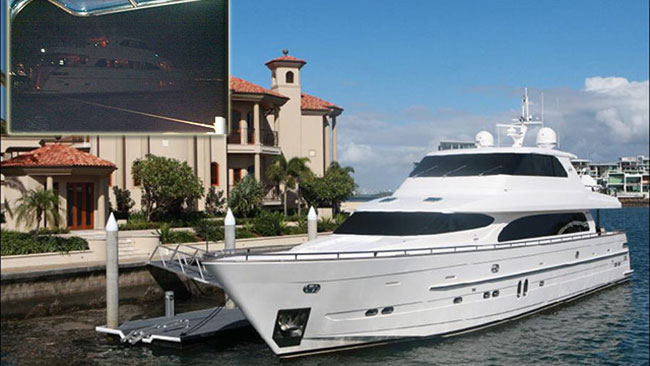 BILLIONAIRE Clive Palmer – the man planning to build Titanic II – had to make a mercy call to rescuers when his superyacht drifted perilously close to rocks.

The $5 million-plus vessel lost power and began drifting towards rocks on the north-eastern corner of Wavebreak Island on the Broafdwater.

It is believed the mining magnate was entertaining business associates onboard the vessel, with luxury vehicles seen parked outside his Sovereign Islands mega-mansion.

“They told us there was no propulsion and that they had lost power … and had gone towards the rocks,” VMR search and rescue controller Steve Pomas said.

“The passengers seemed a bit panicked because it could’ve turned into a nasty situation … a lot of people had lifejackets on.”

It took two hours to tow the vessel to shore.

It was not the first time Mr Palmer  had called for help out on the water.

“We have assisted Clive once before when he ran aground in a similar-sized boat on the northern Broadwater a few years ago.”

Mr Palmer’s string of bad boating luck is ironic considering he plans to build the Titanic II, a modern-day replica of the original, ill-fated cruise ship, which he hopes will set sail in 2016. He has recently promoted the venture overseas, tweeting about the response its had.

Even yesterday he tweeted: “The world has embraced Titanic II”.

Mr Palmer was unavailable for comment when contacted by the Bulletin yesterday.