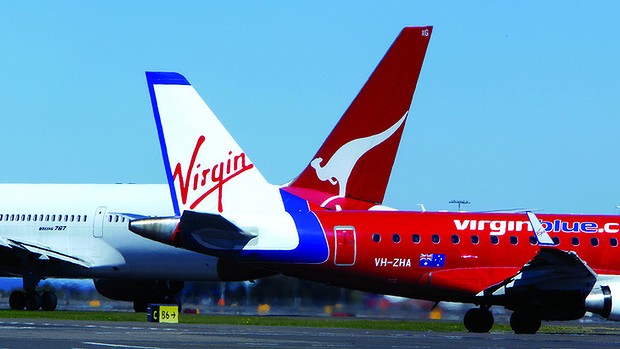 Fares on one of the busiest airline routes in the world between Sydney and Melbourne are about 10 per cent higher than the same time last year despite the bitter battle between Qantas and Virgin Australia.

Analysis by Macquarie Equities also shows that Virgin is charging about 10 per cent more for business class tickets than Qantas on the Sydney-Melbourne route.

It indicates Virgin believes it no longer has to undercut Qantas in order to win over corporate flyers.

The two airlines have been engaged in a battle for lucrative business travellers for more than two years, but Virgin made clear last week that it would only now start to benefit from its efforts to reshape itself as a premium airline.

The Macquarie analysis indicates ticket prices for flights between the two cities in February and March are 10 per cent higher for both Virgin and Qantas than the same months last year.

However, the battle between the two airlines is likely to keep a lid on major increases in fares.

Qantas has said it plans to boost capacity in the domestic market by 4 per cent in the second half of this financial year, which is typically a tougher period for airlines to make money.

Virgin changed tact last week when it decided against releasing forecasts for capacity in the second half, in an apparent attempt to side step its larger rival.

The Macquarie analysts said Qantas was focusing its flying to Sydney and Melbourne, where it has a critical mass, suggesting that ”the capacity is built into the system to discourage further capacity introductions from Virgin”.

In contrast, Virgin has increased its presence on routes to Perth with regional charter flights.

The analysts said the increase in ticket prices on the so-called golden triangle – Melbourne, Sydney and Brisbane – should be a positive for both Qantas and Virgin given its importance to their profitability.

Virgin also has majority control of Tigerair Australia, which is in the midst of a pitched battle with Jetstar.

While the dogfight in the skies has been good news for travellers chasing cheap tickets, it has taken a big toll on Qantas and Virgin which last week reported first-half statutory losses of $235 million and $84 million respectively.

Under the leadership of John Borghetti, Virgin has been remodelling itself as a directly comparable competitor to Qantas by competing in all segments of the market including regional, premium and budget flying.