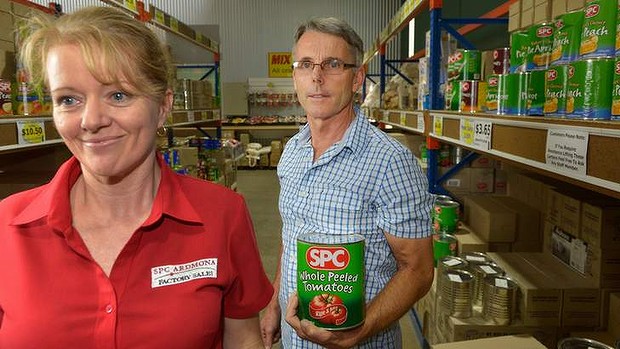 Shepparton’s tinned fruit factory outlet was the town’s biggest tourism draw, according to the mayor, and just as worthy a drawcard as a chocolate factory tour in Hobart.

On Monday, Prime Minister Tony Abbott defended a decision to give Cadbury in Hobart a $16 million grant to revive its chocolate factory tours, saying Tasmania needed the project for tourism and to create employment.

But Greater Shepparton mayor Jenny Houlihan said Cadbury’s tourism claim was no greater than Shepparton’s, and that SPC-Ardmona provided sources of tourism.

She said backpackers came to Shepparton to pick fruit for the cannery and bus loads of tourists travelled from Melbourne to a privately run factory outlet that sold slabs of SPC Ardmona fruit in cans. The cannery had also previously offered factory tours.

”When I heard Tony Abbott’s comments on why they invested in Cadbury, I thought, ‘Is this for real?’ Even though the [SPC] tours are actually not going any more, one of our main tourist attractions is the SPCA factory outlet,” Cr Houlihan said.

Factory outlet co-owner Andrew Prentice said he had a contract with SPC Ardmona and up to three bus loads of tourists stopped to shop each day.

He said the outlet had 250,000 transactions a year from tourists, who often travelled with friends and family. Locals also shopped there. ”I would go so far as to say I am devastated by what I am hearing,” he said.

Other attractions such as the city’s motor museum and art gallery were gaining in popularity, she said.

Cr Houlihan said the city would not stoop to giant peaches – such as the giant water tower peach in Gaffney in South Carolina – for tourism.

”We are a bit more sophisticated than that and we have moved on from that kind of thing. I would be very surprised if we would think it was a solution at this stage.”