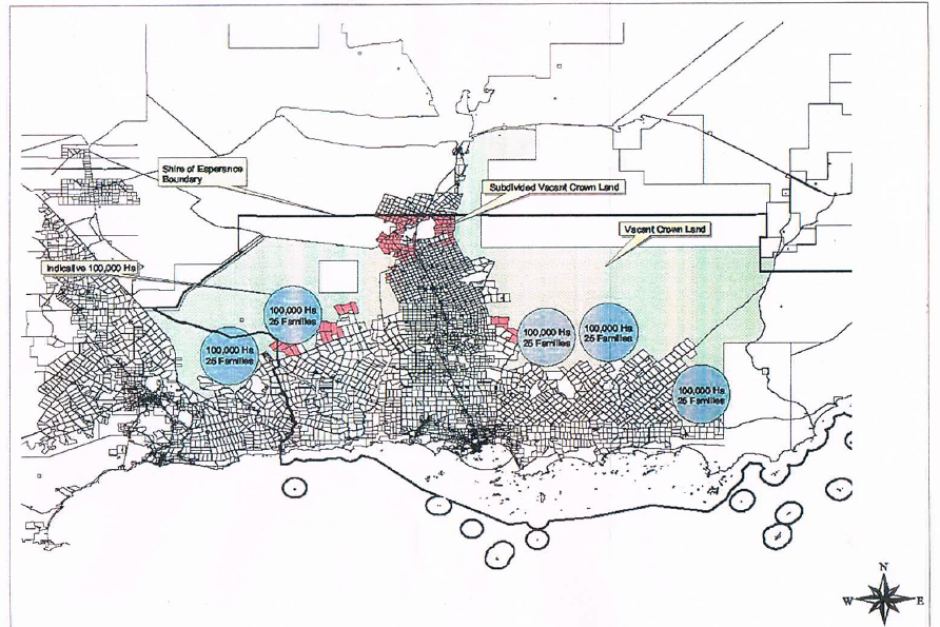 TTN: The Western Australian Shire of Esperance is under fire for considering advanced plans by agriculture development and investment groups to farm 500,000 hectares of ‘biologically rich’ woodlands. A new species of Eucalypt was discovered in late 2014, and an international biologist has said that’s just one indication of many potential rare species that could still be thriving in the “largest remaining intact Mediterranean habitat in the world”.

As indicated by a picture included in this story, Esperance’s tourism industry is still in its infancy despite the region’s natural wonders.

Great Western Woodlands: Fears over proposal to release 500,000 hectares of reserve for farming

There are fears up to 500,000 hectares of biologically rich woodlands on Western Australia’s south coast could be destroyed for farming.

The Great Western Woodlands is home to a fifth of Australia’s known flora and is the largest remaining intact Mediterranean habitat in the world.

The 16 million hectares of woodland extends for hundreds of kilometres and in the last few weeks conservation biologists identified a new species of eucalypt.

The Shire of Esperance, in conjunction with the Goldfields-Esperance Development Commission have identified around 500,000 hectares of Crown land that they believe should be considered for agricultural development.

Conservation biologist and former curator of London’s famous Kew Gardens, Professor Steve Hopper, has serious concerns about the plan and warned any clearing would pose a “very high risk”.

“It just reflects how much more is out there that we don’t know about.

“We know a fair bit about the country but ongoing biological discovery is bound to happen.”

Esperance Shire president Malcolm Heasman said the proposal was about ensuring the economic future of the town and was in its extremely early stages.

“When we were compiling our economic development strategy, we found the only way we are going to grow is agriculture,” Mr Heasman said.

“We don’t have a lot of other strings to the bow … we aren’t a mining locality and we don’t have big manufacturing industries.”

He confirmed the proposal was not to clear any predetermined amount.

“I know the one map that has been touted around shows five areas of 100,000 hectares encircling Esperance – that is certainly not the intention,” he said.

“These might be the areas that we could focus on and see if we could explore any expansion.

“The Great Western Woodlands cover an enormous amount of area and it’s not about devastating any biodiversity zone or anything like that.

“It’s about responsible agriculture at the end of the day because when it’s all said and done the world is growing and does need feeding.”

Land release would have ‘significant economic and social impact’

The Wilderness Society obtained documents through Freedom of Information (FOI) laws showing state Cabinet and government departments have been briefed on the proposal.

The documents reveal an Agricultural Lands Release Implementation Plan, showing a two-year timeline to get the project underway including a lobbying strategy if agricultural potential is confirmed.

The timeline lists “ongoing lobbying and advocacy for allocation of additional agricultural land released as freehold tenure and clearing of current freehold land for agriculture” as part of the plan.

In June, CEOs from the Esperance Chamber of Commerce, Goldfields-Esperance Development Commission and the Esperance and Ravensthorpe Shire wrote a letter to Premier Colin Barnett.

“We are looking for the State to partner with the shires of Esperance and Ravensthorpe to assess the rural land currently held by the Crown to ensure viable unallocated lands can be brought to the market,” they wrote.

“Given the several hundred thousands of hectares available within [the shires] it would only require a portion of this to be released to have a significant economic and social impact on the local and state economy.

“To progress this, a multi-agency project team will identify all appropriate investigations and potentially a pilot release program to plan and implement an ecologically and economically sustainable release of the most productive and appropriate unallocated agricultural land.

“Every additional 100,000 hectares released is effectively an opportunity for an additional 25 businesses plus the flow-on benefits to downstream industries.”

The WA Department of Regional Development, which has been briefed on the proposal, warned that the people taking up the work would likely be large and potentially foreign corporate entities.

“As part of the shire’s consultation, it is important the community understands the potential for large corporate investment and have a level of comfort with that,” the department said.

Conservation groups fear the clearing could be done in stages to avoid a thorough environmental assessment.

“In our view, it is imperative that a clear message be sent at the earliest possible opportunity to the proponents that this kind of backward-looking and destructive proposal cannot be made environmentally acceptable – including by attempting to break it down into multiple smaller proposals,” they warned.

EPA chairman Dr Paul Vogel has taken an interest in the proposal.

“I have taken the opportunity to write to the director general of the Department of Regional Development to convey my views on the environmental significance of the Great Western Woodlands,” he said.

“I have also advised the Department of Regional Development that should the proposal advance past the planning stages, it would be preferable to refer the entire area considered for future clearing for agricultural purposes, rather than just the first stage of a much larger proposal.”