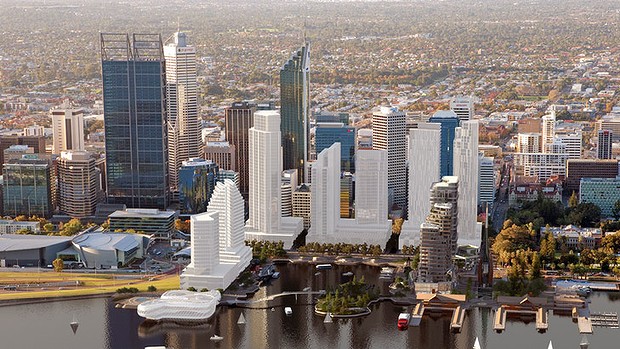 TTN: The $2.6b ‘mixed-use’ precinct being built on the Perth waterfront is in danger of becoming a dead-zone if zealous planning laws regarding noise abatement are applied. Mike Keilor, owner of The Mustang Bar and Chairman of Business Investment Group Northbridge, said shared-space businesses were often burdened with unrealistic expectations from residents.

Fears Elizabeth Quay will be stifled by noise rules

THERE are fears Perth’s new waterfront precinct will be a “dead zone” at night because planning laws will restrict how much noise venues can make.

The chairman of Business Improvement Group Northbridge, Mike Keillor, said waiters simply collecting plates in an al fresco area or people chatting outside a bar could create enough noise for a venue to be told off for breaking sound rules.

“It’s safe to say it could well end up being nowhere near as vibrant as what people want,” he told The Sunday Times.

Perth Federal MP Alannah MacTiernan said it was a “genuine concern” that had to be addressed “very seriously”.

“We’ve got problems in East Perth with some of the places that have been built next to the rail line,” the former state planning minister said.

The $2.6 billion Elizabeth Quay precinct will be a mixed-used space with commercial businesses, such as bars and restaurants, alongside residential apartments and hotels.

Premier Colin Barnett announced this week that a 240-room Ritz-Carlton hotel would be developed on the site.

The Government has said the Elizabeth Quay project will be “the centrepiece of a bold plan” to “revitalise our city”.

But Mr Keillor, who co-owns The Mustang Bar in Northbridge, said that in shared spaces such as Elizabeth Quay businesses were often burdened with unrealistic expectations of residents.

“Everyone thinks inner-city living is a great idea,” he said.

“Then they move in and they think, ‘Gee, I wish the band downstairs would shut up’.

“Invariably the burden is unfairly shifted on to the business owners who have invested millions. They might be told not to use the al fresco area after 8pm – but people don’t go out to eat until after 8pm.”

“All of these sounds are part of a rich urban fabric, however if not managed effectively can cause significant disturbance (noise nuisance) to those living and working close to noise sources,” it says. Ms MacTiernan said this didn’t go far enough. She said current laws needed to be strengthened so residential developments were forced to come up with designs that “massively” reduced noise.

“We’re not strict enough because we don’t want to add to the cost,” she said.

“It can be done. They do it in Europe and in other parts of Australia. If you stay at the airport hotel in Melbourne you can look out the window and see the rivets on a plane and you can’t hear a thing.” Planning Minister John Day’s office referred The Sunday Times to the Metropolitan Redevelopment Authority, which is the planning authority for the land.

MRA chief executive Kieran Kinsella said “careful consideration” had been given to sound abatement at the Quay.

He said developers had to to use design elements such as double glazing and acoustic insulation.

Developers must also alert buyers that the property is in an area likely to have higher noise levels than in traditional suburban areas.

Mr Kinsella said the Department of Environment Regulation and the City of Perth were ultimately responsible for ensuring compliance with noise regulations.