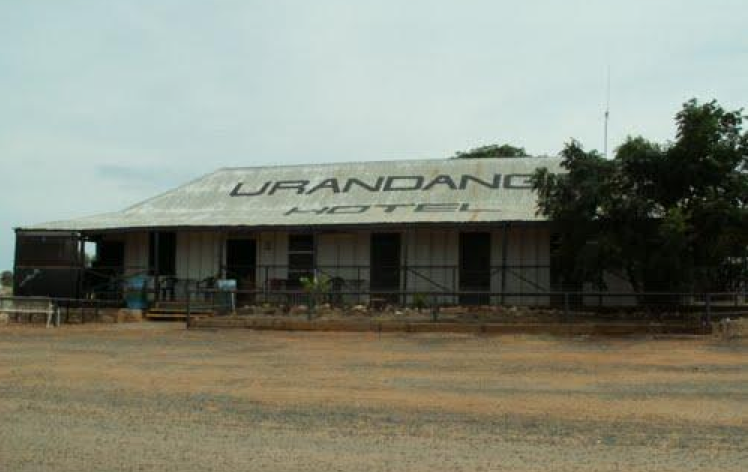 Pam Forster, owner/ operator of the Dangi pub in Urandangi QLD (pictured), has told how a group of 7 aboriginal people, on being turned away after crossing the NT/QLD border, wielded iron bars, destroyed cars and attempted to force entry to the outback pub. Ms Forster doesn’t blame the drunken assailants though, but the availability of alcohol and lack of police in remote communities

Pub owner tells of fearing for lives during riot

THE owner of a Queensland Outback pub has told how she spent a terrifying hour fearing for her life after a drunken mob armed with iron bars allegedly started a riot in the early hours of yesterday morning.

Pam Forster, owner of the Dangi Pub in Urandangi – near the Northern Territory border, was forced to turn away the Aboriginal group because they were drunk.

The group, who had crossed the NT border, then allegedly­ destroyed multiple cars and attempted­ to knock down the front doors.

Ms Forster and eight patrons hunkered down inside and prayed the group would not force their way in as they waited for police to make the two-hour drive from Mt Isa.

“They were going to bash down the door and kill us,’’ she said. “It was frightening, they were carrying iron bars and throwing rocks, they were out of control.’’

It’s believed the riot lasted an hour before they fled. Police arrived with the dog squad and rounded up a group.

Five men aged 42, 33, 23, 32, 47 and two women aged 31 and 42, all from the NT, have been charged with an array of offences including break and enter with intent, attempted entry, wilful damage, unlawful assembly and threatening violence.

They are due to begin appearing­ before the Mount Isa Magistrates court from tomorrow­. The riot has reignited the debate about the accessibility­ of alcohol in Aboriginal­ communities.

“It has been on the cards for a while,” Ms Forster said.

“They drink warm moselle­ laced with vodka, it turns nice people into horrors. They come down here because they know there are no police for miles.” The town was 200km south of Mt Isa, too far away for authorities to act.

“Nobody from either side of politics will do anything.’’

“There are no consequences for their actions.’’

Urandangi is a town of just six adults and one child.