Dundee takes 2m croc to councillor in his Monaro 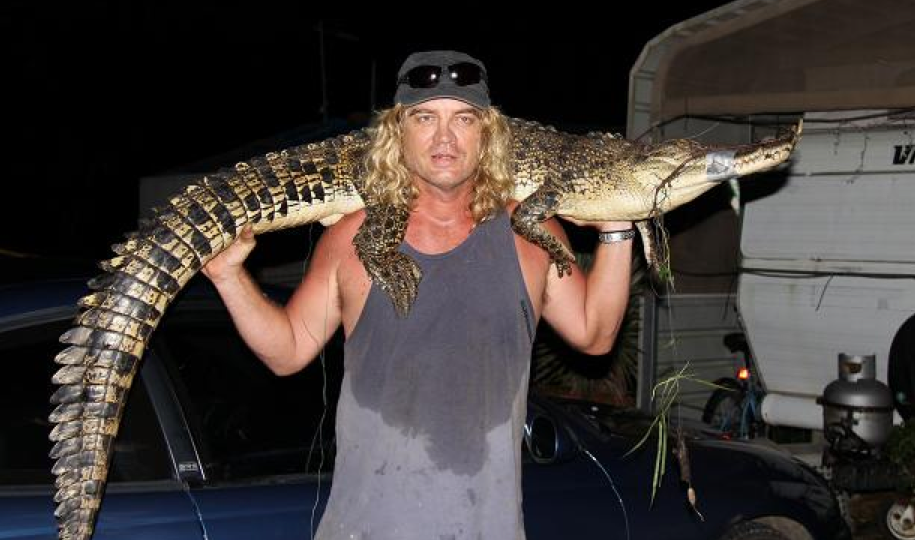 An Australian’s guide to lobbying your local councillor..a croc might help!

North Queensland fisherman Ashley Shala was just trying to catch a couple of barramundi for his birthday barbeque when he snagged a two-metre saltwater crocodile instead.

Not realising at first, Ashley was celebrating what he thought was a huge fish on his line.

“For fifteen or twenty minutes while I was fighting it I thought I had a huge barra and I was just yahooing and carrying on on my own up in the swamp… I actually thought all my birthdays had come at once,” he said.

“(But then) the moon came from behind the clouds… and I could see that it was a crocodile wrapped up”.

He says he’d made complaints before and nothing had been done.

He wrestled and tethered the croc and waited two hours for his mate Gav to come and help him tape its mouth shut. (All the while continuing to fish!)

“We had to walk two kilometres through the mangroves… I carried the front and Gav carried the back and we slipped and slided all the way back to the car,” he said.

Ashley put the saltie in the boot of his car and drove it around to Cassowary Coast councillor Mark Nolan’s house – arriving at around 11pm and knocking on the door.

Councillor Nolan told him there was nothing he could do so late at night but that he’d deal with it in the morning. He asked Ashley to take the croc home to the caravan park where he lives.

“My girlfriend wouldn’t let me keep it in the caravan… but she was nice enough to let me sleep in one of the donga rooms that nobody was staying in,” he said.

Ashley took the top bunk, the saltie took the floor.

“It wasn’t until just before sunrise he started making some strange growling noises and crawling around on the floor or under the bed and moving around in the room,” he said.

When asked if that disturbed his sleep he said “no, not really”.

According to Ashley councillor Nolan might have to get used to these kinds of visits.

“I said if I keep getting them I’m going to keep bringing them to your place.”

“I get barra fever… I don’t know if it’s a diagnosed sickness yet but a lot of people think I’ve got it,” he said.

So what does councillor Nolan think of this act of local lobbying?

“Paul Hogan’s got nothing on Ashley Sala mate. Paul Hogan never slept with a saltie, Ashley has, and I witnessed it. So I give Ashley a 10 out of 10 for the way he cared for the reptile during the night and now it’s been relocated and it’s safely back in a crocodile farm,” he said. 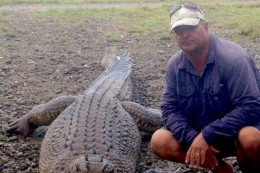 Posted by TTN 9th May 2013, From Cairns Post Local Jim Millar is pictured

WILDLIFE rangers have continued their search for those responsible for the apparent trophy kill of a large saltwater crocodile in Queensland’s Trinity Inlet.

A local fisherman found the crocodile carcass with its head cut off at Hills Creek early Saturday morning (4th May 2013).

The death of the 3.3m croc, known among locals as Boofhead, is being investigated by rangers.

“The cultural value associated with crocodiles have been desecrated by this act,” he said. 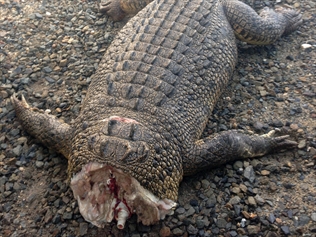 Mr Mundraby said the crocodile was well known in the area.

It had most likely been killed by trophy hunters, he said.

“It was definitely a trophy kill,” he said.

Barron River MP Michael Trout said crocodile management plans were in place to remove crocs from heavily populated areas, but warned it was illegal for people to kill the animals.

The maximum penalty for illegally killing a crocodile is $24,750.