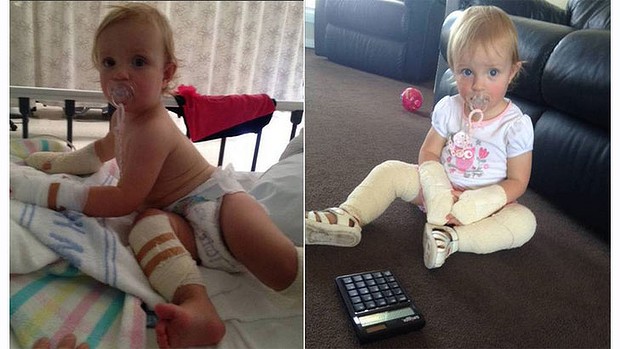 TTN: In an outstanding example of procurement departments gone wrong, NSW’ Dubbo Regional Council is claiming the cheapest suitable shade structure for a kids’ skate park would cost upward of $700k. Shade has been called for since a baby came into contact with burning hot steel and received third degree burns.

Milla Campion recovering from her burns.

A steel ramp that became scalding hot beneath the summer sun left one-year-old Milla Campion with third-degree burns on her hands and legs when she fell at the Dubbo skate park in December last year.

Now Milla’s parents want a permanent shade structure to be installed over the children’s section of the skate park so more children do not end up in hospital.

Milla’s hand during the treatment process.

But Dubbo City Council says there would be no money for a permanent structure for the next four years.

The cheapest design it has considered would cost up to $700,000, much more than the cost of the world-class skatepark itself.

“You could build a house for that, you could build two houses,” said Milla’s mother, Nicki Campion, who was shocked by the quoted price.

Mrs Campion said the family’s nanny had taken Milla and her two brothers on a visit to the skatepark around lunchtime on Thursday December 19, a day when the temperature rose to 36 degrees.

Milla tried to begin walking up a painted steel ramp in the children’s area, slipped and put her hands out.

Milla’s hands were only against the ramp’s hot metal for a few seconds before the nanny rescued her, Mrs Campion said.

The nanny poured water from a water bottle over Milla’s hands before taking the children to the Western Plains Medical Centre; as an Englishwoman new to Dubbo, she did not know her way to the hospital.

Milla has now recovered but it is too soon to tell whether her scarring will be permanent.

Mrs Campion said Dubbo Base Hospital told her other children had been burned at the park.

“We never thought that just by taking the kids to somewhere they enjoy that it could result in such a tragedy,” she said.

Mrs Campion said she was not considering suing council but she urged it to take immediate action.

“If council doesn’t take this seriously and look into a permanent shade structure, they at least need warning signs to let parents know that in the heat, this is what can happen.”

A council spokesperson said several shadecloths around the city – including one over the original section of the skate park – had been slashed or burned by vandals.

But council rejected the idea after it found the cheaper of two possible designs would cost between $548,000 and $698,000.

Deputy Mayor Ben Shields said the prices for a shade structure quoted by the council executive were unrealistically high.

He said a shade structure would remove the danger of burns, provide sun safety and allow residents to use the park more during summer.

“We’re getting two hours a day usage out of the skate park at the moment – it’s pathetic.”

Councillor Tina Reynolds said she had been pushing for skatepark shading for several years since first hearing complaints from parents.

Cr Reynolds said many people had pledged their support and some businesses had offered materials to help shade the park.