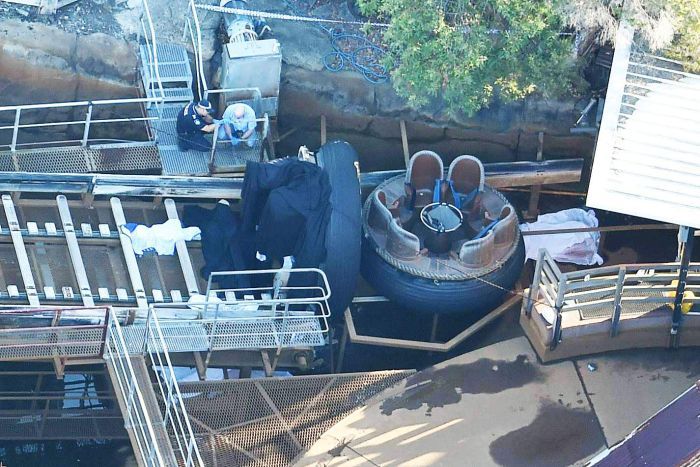 The Dreamworld tragedy in which four people were killed could have been avoided.

Work Health and Safety law in Australia is about accountability – a death that nobody could have seen coming is less punishable than paper cuts that happen every day and are allowed to continue happening.

Dreamworld were inspected by a rep from The Australian Institute for the Certificate of Inspection Personnel in 2012, and the inspector found that on one ride, ‘all vessels were not fit for servicing’ and that ‘Dreamworld did not produce evidence of having a quality management system in place’.

With no safety quality management systems in place, the buck stops with executives – but just watch how the executives of Ardent Leisure dodge this one. Punishment for a corporation found to be neglectful stands at $3m – a slap on the wrist for a company with a market cap (value) of $937m – or 5 years in jail for any individual found responsible. But no individual will be found responsible. And with major shareholders JP Morgan and HSBC as their 2nd and 3rd biggest backers, they probably have the legal expertise to avoid even a measly $3m fine.

As an indication of how unwilling any player in this tragedy is to point the finger, a paramedic on the scene, instead of using the phrases ‘deaths’, or ‘dismemberment’ or any other phrase that would adequately describe the realistic horror of the event, said all four victims had ‘sustained injuries that were incompatible with living.’

Even a paramedic has to fear using the word ‘dead’, fearing retribution for speaking out of turn to the media.

According to Ardent Leisure’s Annual Report FY14/15, Group CEO Deborah Thomas has a base salary of $670k, plus another 50% of that salary available in bonuses that are received on certain key performance indicators – one of which is safety.

Ardent’s CEO – Theme Parks Craig Davidson receives a base salary of $350k, with another 15% received on bonus.

The above suggests that if the person in charge of safety at the Theme Parks – Craig Davidson – was to report significant safety hazards, he would be threatening his boss, Deborah Thomas, with a pay cut, because one of the KPIs on which her bonus is based is safety.

“(There is) a cultural issue that has affected the way things get done in Dreamworld. There is a culture of fear. The words used to me were ‘Don’t stick your head up too high because it’s likely to get chopped off’.”

So Craig Davidson, earning $350k plus a KPI based on safety, might be docked his bonus for the incident – because he had no incentive to tell his manager and could have had a quality assurance/safety system in place. He will be repentant, bless him. But as his 15% bonus is only partially based on the safety KPI, he could lose as little as $1000, and Ardent can say they punished the person responsible.

Or, Ardent Leisure, by docking Davidson’s bonus for ‘imperfect systems’ rather than ‘incompetence’ can let Davidson go, saying it was one bad egg, nothing to see here, rather than take heat over lax safety at the Australian icon. If Davidson’s lawyer is good enough, the lawyers will be able to defer blame of the incident to some sort of human error by an individual ride operator.

Thompson, having spent ten years managing women’s magazines before moving to Ardent and being much more interested in the marketing product differentiation rather than terribly important safety and operational issues at Ardent’s Dreamworld, d’Albora Marinas and AMF Bowling sites, can play dumb, and promise to ship shape that one particular ride. No more snowy river rapid-style rides will have deaths, she will promise.

Speaking of liability – a perusal of Ardent’s Annual Report shows $11m in ‘set-off’ tax liabilities (tax offsets, i.e. tax avoidance). $4.6m of that $11m is owed to the Australian tax department and $6.1m owed to the US.

That $4.6m loss to the Australian tax payer would go a long way to covering the 30 detectives sent by Australian police to the site (yes, 30.)

So it appears that no-one involved in the incident will be punished. Lives lost, completely preventable, but the buck stops no-where when your biggest investors include JP Morgan and HSBC. The buck will keep flowing whilst big banks are involved.

Even though international tax avoidance is a hot, hot topic in 2016; even though Dreamworld is one of Australian domestic tourism’s most beloved icons; even though many white collar Australians understand that a lack of safety standards is indeed SOMEONE’s fault – no-one will be blamed. Maybe someone will be fired. Four people have died, and dozens more will before state and federal governments will even consider harmonising safety liability.

Below QLD premier Annastacia Palazczuk explains to a journalist that the police will do their thing and if they need legislative help from the government, they’ll get it. Really though, the work of policing safety needs to happen before people die. 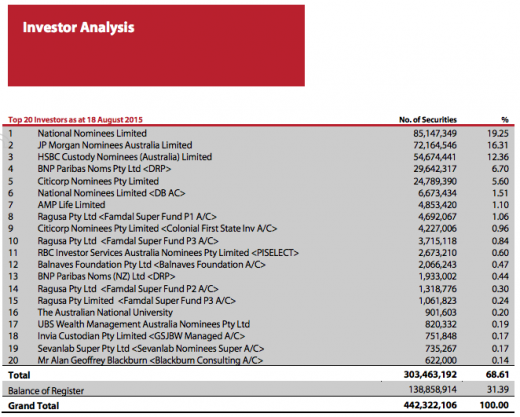 Picture: A screen shot of Ardent Leisure’s investor summary. Below, the QLD Premier exemplifies how corporations are not interfered with by government in regards to safety.

MICHAEL BRISSENDEN: Sure, they have their own management as you say but do you think there is a role for government now to intervene and I guess make sure that safety is looked at more closely?

ANNASTACIA PALASZCZUK: Well, I think the first thing is let’s, let the police do their work in relation to this particular ride. And you know, if they want extra support from government, we are more than happy to provide that support.

Hear the full AM Story

Police say it is a miracle that two children survived Queensland’s worst theme park tragedy, with four adults dying when a ride malfunctioned at Dreamworld on the Gold Coast yesterday.

Public servants Kate Goodchild, her brother Luke Dorsett and his partner Roozbeh Araghi, who were all on holidays from Canberra, were killed when the 30-year-old ride malfunctioned.

Her family have asked for privacy to allow them to grieve her death.

Authorities said two rafts on the Thunder River Rapids hit one another at the end of the ride, tipping one backwards.

Two people were flung from the raft and two became trapped on the conveyor belt of the ride, which is marketed as a family-friendly thrill that two-year-olds are allowed on.

A boy and girl, aged 10 and 12, were on the same raft but managed to escape the disaster, Police Assistant Commissioner Brian Codd said.

“In terms of how they escaped, maybe through the providence of God or somebody,” he said.

“It is almost a miracle that anybody came out of that.

“Coming to a place where families want to come and enjoy each other’s company and just have fun doesn’t really equate to such a tragedy as we’ve seen.”

Ms Goodchild and Mr Dorsett worked at the Department of Human Services, and Mr Araghi worked at the Australian Bureau of Statistics.

The ABS said in a statement it was devastated, describing Mr Araghi as a hardworking member of the communications team “who brought joy and fun to the workplace”.

Rafts taken away for forensic examination

The ride will remain a crime scene for two or three days, and Assistant Commissioner Codd said police would not rush how long the investigation takes before the theme park can reopen.

What we know about the ride:

An engineering examination is underway and rafts have been taken away by the forensic team.

The Australian Workers Union had already last year raised serious concerns about operation and maintenance of some equipment at the park, but those complaints were not over the Thunder River Rapid ride.

The incident was captured on CCTV footage.

Assistant Commissioner Codd, who has seen the footage, said through an “apparent misoperation or some catastrophe”, four people have lost their lives.

“There will be a broad range of things examined — policies, procedures, maintenance schedules and the actual, I guess, the make-up of the whole ride itself in terms of compliance about contemporary engineering,” he said.

“To hold accountable any person that needs to be held account.”

Dozens of detectives are currently at the scene.

Yesterday’s incident comes just six months after a man almost drowned in another ride incident at the park.

Samson Sherrin, 19, nearly drowned and suffers long-term injuries after he fell from a log ride and was run over by several other ‘logs’ before being pulled out by a friend.

An Australian Workers Union (AWU) official said it had held serious concerns about the operation and maintenance of some equipment last year.

Things have gone wrong at Gold Coast theme parks before, but there has never been a fatality. Read about some of other incidents.

AWU Queensland secretary Ben Swan said he did not want to inflame the current situation and the union’s concerns did not involve the same ride.

“We did hold some very grave concerns about safety of equipment and the operation of equipment,” he said.

The union had lodged an initial complaint about safety 18 months ago with park owner Ardent Leisure after a separate industrial incident.

They made an application under right to information laws seeking the release of particular information from the division of Workplace Health and Safety, but that was opposed, Mr Swan said.

“I don’t want to inflame the situation,” he said.

“However we do think that in the interests of workers at that facility, but also to the patrons of that facility, people who visit it for an enjoyable experience, that it is important there is a full inquiry.”

The ABC recently reported that every ride has “between 75 and 200 checks” that need to be completed in order to start up rides.

“It’s a lot of pressure and I’d never put anyone on a ride that I wasn’t willing to go on myself,” one of the ride technicians said in August.

Thirty detectives at the scene

It was the worst Australian theme park disaster since 1979, when seven people died in a fire on the Ghost Train at Luna Park in Sydney.

“That is why this investigation needs to be thorough,” she said.

“The scene was horrific.”

Gold Coast Mayor Tom Tate said it was a dreadful accident at one of the Coast’s most popular attractions.

He would not be drawn on whether the ride should be closed.

“Normally their maintenance schedule is world class and this is one of those freak accidents,” he told ABC News Breakfast.

“When that’s handed down we want to know exactly what’s happened so that none of this will be repeated again.”

A coronial investigation was underway and counselling offered to those who witnessed the incident.