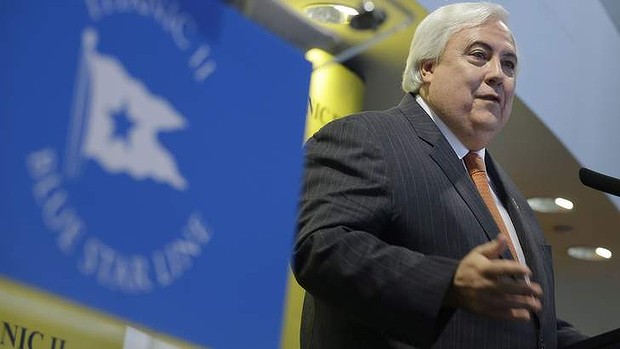 From smh.com.au
“Ship of dreams’: Clive Palmer speaks during a news conference about his intention to build the Titanic II. Photo: AP

Australian billionaire Clive Palmer unveiled his grand design plans to build a modern-day replica of the doomed Titanic, confirming the cruise liner would make its maiden voyage in 2016.

At a press conference in New York on Tuesday, and following a rendition of Celine Dion’s My Heart Will Go On, “Professor” Palmer told the world’s media construction of the 835-cabin ship would begin in China later this year.

The Titanic was a ship of dreams. Titanic II will be the ship where dreams come true.

He said 40,000 people had already registered for tickets on the first voyage, which will retrace the fateful 1912 trip from Southampton to New York, in which more than 1300 passengers and crew died.

Refusing to divulge the cost of Titanic II (“I have enough money to pay it so that’s all that really matters”), the 58-year-old said it was not about money but recreating the romance and memories of a bygone era – minus the iceberg.

“One of the benefits of global warming is there’s not as many icebergs in the North Atlantic,” he quipped.

In this rendering provided by Blue Star Line, the grand staircase on the Titanic II. Photo: AP

“The Titanic was a ship of dreams. Titanic II will be the ship where dreams come true.”

Passengers aboard the 10-deck ship will be provided with 1912-style outfits to wear during their holiday, and there would be no phone, television and he was debating about internet access.

“You can take the wife and fall in love again.”

Titanic II will have Turkish baths, a smoking room, casino, theatre, and hospital. Key differences to the original include a high-tech engine, air conditioning and a safety deck with more lifeboats (including 18 covered motorised lifeboats).

As with the original, there would be first, second and third classes and they would not be allowed to mingle. Palmer himself said he would be travelling third class, dressed in a wig and 1912 garb.

“I like Irish stew and potatoes,” the billionaire, who is staying at the $2000 a night Waldorf Astoria in New York, said.

“I’m looking forward to banging the drums, playing the fiddle and getting dizzy as I twirl around like Leonardo did in the movie,” referring to the 1997 blockbuster starring Leonardo Dicaprio.

At the press conference, Palmer provided Helen Benziger, from Wyoming, whose great grandmother survived the 1912 disaster, to speak. She said she was “thrilled” about the project “because the professor has assured me he will honour those passengers that perished and survived.”

But Titanic expert J. Joseph Edgette, professor emeritus of education at Widener University in Chester, said a cruise ship named Titanic II was “a little tacky” and there was a maritime tradition of not naming a ship after one lost at sea.

Small in scale compared to luxury cruise ships today, and boasting only one pool, commentators also wondered whether it was financially viable after the initial hype.

Palmer dismissed such skepticism and also rejected concerns that the Chinese construction company CSC Jinling had no experience building international luxury liners, saying it was strong motivation to show the world what it can do.

Palmer said Titanic II would be the safest cruise ship in the world but when asked if it would be unsinkable, he said: “It’s very cavalier to say that. I think people have said that in the past and lived to regret it. “

Palmer will tonight host a 700 person dinner, on the USS Intrepid in New York tonight, and tweeted he was flying in 60 chefs to recreate the same 11 course menu as served to the first class passengers on the original Titanic.