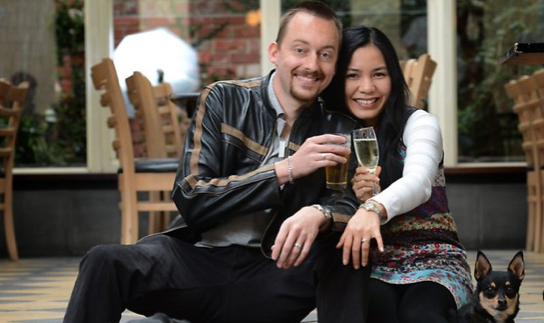 DOG lovers are a special breed – and now they have the chance to speed-date each other with their pets in tow.

The Flying Duck Hotel in the Melbourne suburb of Prahran is now the home of Mad Dog Mondays where singles with pooches are meeting for smooches – if they get lucky.

And many do. Several couples have married after dating at the event.

Deedee and Andrew Offer tied the knot after first setting tails wagging at a Mad Dog Monday. They even had their reception at the pub, complete with pups Xander and Harvey.

Andrew said he knew Deedee was the one for him when she insisted he bring his dog to their first date.

“It’s a great opener for a conversation,” he said.

The couple married in March and live with their two pups, but plan to add to the family.

“Hopefully we get a non-furry child next,” Andrew said.

“Word got around and before we knew it Mad Dog Monday took off,” he said.

“Just last Monday we had 30 dogs in, mutual dog affection between singles was noticed as a successful romantic strategy – and what a great ice-breaker,” he said.

From the Sun Herald 8th November 2012