Diehard fans hit the long road from Perth to MCG 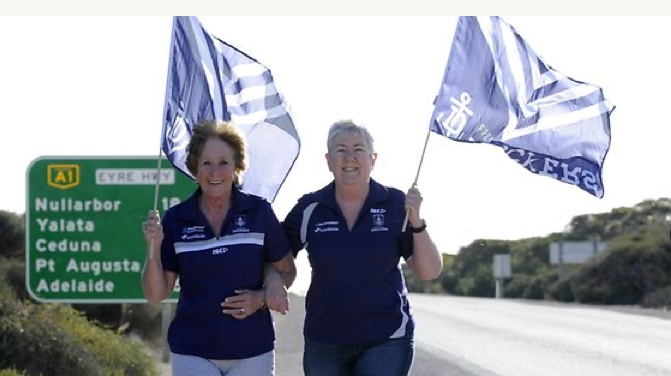 Retired public servants Barbara Johnson and Gail Liversey started the 3500km trip across The Nullarbor just hours after their beloved Fremantle Dockers claimed their historic place in their first-ever AFL Grand Final on the weekend.

PerthNow caught up with the passionate supporters, both members of the club’s official female fan group The Sirens, at the Border Village, just past the WA border and within South Australia this morning.

The pair, wearing matching Dockers shirts, was so excited by Saturday night’s win that they packed up their Toyota Corolla hatchback and hit the road first thing on Sunday morning.

“We are in it and that’s the main thing,” Ms Liversey, from Hamilton Hill, said.

“You’ve got to get there first and now anything can happen.

“Like (coach) Ross Lyon has been saying all year, our game stands up in any situation.

But while Ms Liversey was confident her team was destined for victory at the MCG on Saturday, Ms Johnson was a little more nervous.

“I am a bit more confident than Barb,” Ms Liversey said.

“I have a really good feeling that we can do it.”

“We were at the preliminary final together and I was just nervous the whole time.

“We are huge fans. We’ve been to every home game together for the last 12 years.

“I like the fact that the boys play for the team, not for themselves.

“It’s all for the team and the supporter base is just fantastic. We’re all passionate and we’re all very supportive of each other.”

Follow reporter Yasmine Phillips and photographer Daniel Wilkins as they embark on a cross-country road trip from Perth to Melbourne, catching up with Dockers fans along the way.