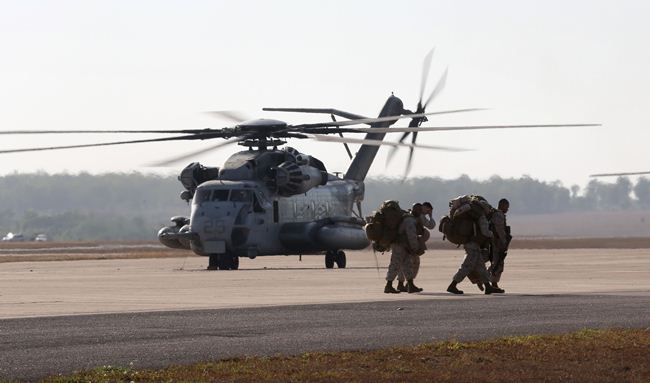 TOP End military bases are in a “sweet spot” beyond the range of Chinese missiles, according to a new report by a US think tank that explains more clearly than ever why Australia is considered crucial to a potential Asia-Pacific conflict.

The official insistence is that US forces are rotating through Darwin to train. But the Washington-based Centre for Strategic and Budgetary Assessments says Australia “has been propelled into the very heart of this century’s most crowded and dynamic geopolitical arena”.

“China has emerged, almost simultaneously, as both Australia’s greatest trading partner and as its greatest potential military threat,” the report said.

More than 1100 Marines will arrive in Darwin next year as the rotations begin to ramp up. US Air Force fighters, tankers and bombers are expected to fly from Top End bases Darwin and Tindal in the coming years.

The CSBA report said that these bases “could serve as launch and recovery sites for long-range surveillance and strike aircraft”.

“Australia represents, for the time being at least, something of a geographic sweet spot in the search for potential operating locations outside the reach of China’s missile forces,” it said.

“As American forward bases in the western Pacific become increasingly vulnerable to Chinese missile threats, the Australian continent – with its solid infrastructure and local technical expertise – could fulfil an important role as a logistical hub and bastion for the alliance.”

The CSBA argued that US aircraft should be spread across northern Australia – including to bases in Queensland, WA and the Cocos Islands – to reduce the chance of China launching a pre-emptive strike.

The report argued that Australia should urgently boost its defence spending and refocus its strategy, particularly towards aircraft with long-range capabilities.