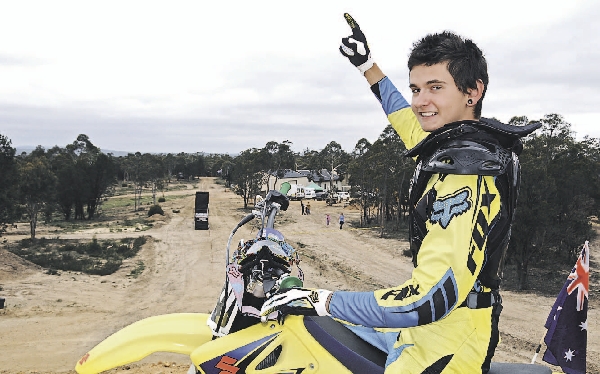 A WORLD champion freestyle motorcycle rider who crashed his bike while making a training jump yesterday has died.

Tyrone Gilks, 19, a confessed adrenalin junkie, was training to break the 94.49m record for the world’s longest ramp-to-ramp dirt jump on a 250cc bike at Maitland showground, west of Newcastle, when he landed badly and was thrown over the handlebars.Paramedics were called about 10.30am and worked on Gilks until a rescue helicopter arrived. He was flown to the John Hunter Hospital in Newcastle, where he had emergency surgery.

He died last night from severe head and chest injuries.

Gilks grew up in the Newcastle area but recently moved to Palm Beach on the Gold Coast, where he was pursuing his passion with a local bike shop MXstore as a sponsor.

An employee from the Burleigh Heads business said managers had gone to be at Gilks’ bedside. “Gilks was a fantastic rider who was in the store every single day. Riding was his life,” the staff member said.

Tributes were made on social media websites as well as Gilks’ Facebook page.

One said: “U will never be forgotten ever u were one of my true mates and never replaceable u will always live on with us.”

A tribute page, R.I.P Tyrone Gilks, had received over 7000 “Likes” within hours. One post read: “another young rider, a life snatched away just like that, its horrible and im sure there are many tears shed tonight, just keep in mind only the good die young.”Brett Smith wrote: “Insane rider, R.I.P with all the other boys up there.”

Another fan, Mandy, posted: “You were simply the best.”Tributes on Twitter also came from around the world; Australian and international motorsport magazines also offered their condolences.

Fox Head Australia posted a photo of Gilks with the message: “We love you, mate. Rest in peace Tyrone Gilks.”