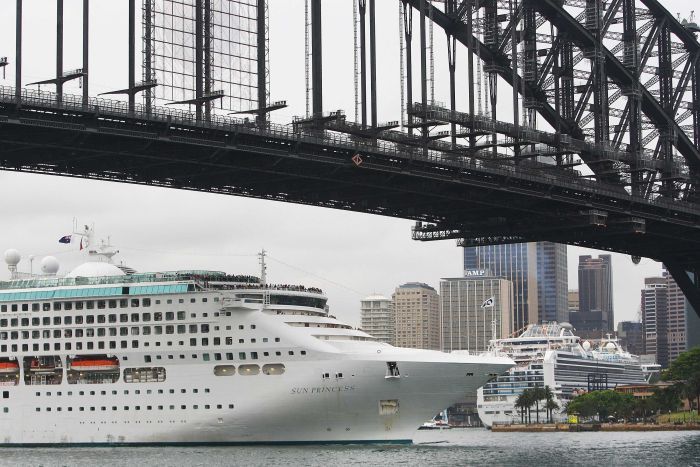 Cruise liners berthed near homes on Sydney harbour are burning a carcinogenic fuel banned in US and European ports. Residents say they’re getting sick but the cruise companies have refused to burn cleaner fuel and the government says it won’t act to stop the dirty ships for at least another year. Anne Connolly investigates.

Residents of the Sydney suburb of Balmain say they’ve been suffering health problems ever since a new cruise ship terminal opened at nearby White Bay in 2013.

‘We realized over a number of months that a lot of the neighbours were becoming sick and we started talking to each other about the fact that we had unusual headaches that we’d never experienced before,’ says Kate Horrobin, a Balmain resident.

‘Little kids were getting sick with asthma that they hadn’t had before or those with asthma are having worsening symptoms. All of these things were unusual symptoms. People were experiencing respiratory problems, even nausea.

‘We started to put two and two together and think about the cruise ships as being the new entrant to the local area, and we started to do some research. We were pretty horrified by what we found.’

What the residents found was that cruise ships berthed at White Bay burn a fuel banned in the northern hemisphere. It’s a low grade diesel known as bunker fuel which has been deemed a grade-one carcinogen by the World Health Organisation.

When the ships are berthed at White Bay, the ships’ funnels are at street height which means acrid fumes flow directly into houses. This means the tiny particulate matter—which is considered most dangerous to human health—is pumped out as exhaust.

‘They’re the most efficient at getting all the way down to the bottom of the lungs and causing health impacts,’ says Daniel Lack, a transport and climate change consultant who has worked with the US Environmental Protection Agency.

‘It’s the bottom of the barrel of oil. Once the refiners take all of that good stuff off, you’re left with the sludge at the bottom.

The impact on public health was not properly taken into account when the cruise ship terminal was moved to White Bay from its former location at Barangaroo, which was further away from homes.

Last month, a parliamentary inquiry called the move to White Bay a serious mistake and criticised the NSW EPA for not being proactive enough in the approval process.

Jeff Angel from the Total Environment Centre says NSW’s Environment Protection Authority failed in its duties: ‘Anyone would’ve known that when you have these polluting cruise ships with their large smokestacks very close to residences that you would get problems.’

‘That was severe regulatory failure, a severe public health failure.’

Residents have been in consultation with the EPA since the terminal opened, but until recently there has been no solution in sight. Until now that is. With NSW in pre-election mode, both parties say they’ll fix the problem by forcing cruise ship operators to burn low-sulfur fuel.

‘I can tell you very clearly that this has been a top priority for me,’ says NSW Environment Minister Rob Stokes.  ‘Air quality issues are absolutely paramount to environmental protection and the protection of human health.

The current Liberal government, which is favoured to win the election, says it will enforce the use of low-sulfur fuel from July 2016.

That means residents will have to endure at least another season of acrid fumes. That’s not very reassuring to mother of three Lisa Marie Murphy, who is concerned about the pollution’s permanent effects on her children.

‘The thing is that this is so preventable. This should never have happened. This terminal being built there should have been built with shore power and with low-sulfur fuel like they use in the rest of the northern hemisphere, Europe, North America, even the Caribbean.’