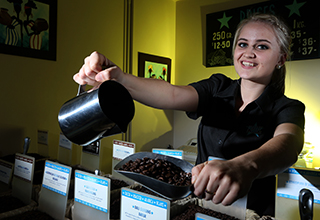 A discussion paper is available outlining options for updating the Act, such as removing the requirement to provide turnover statements to landlords and flexibility for rent review.

Oceana Walk Arcade’s boutique coffee shop Cruze has remained busy for more than three years despite a number of shops closing around them and owner Gilberto Risa said he thought reducing regulation while modernising lease agreements would give new businesses owners more confidence to start out.

“I believe if you make a lease that is fair and simplified it means both parties will be protected, there are no secrets,” he said.

“The retail market is changing drastically with the Internet and the world we live in. Retailers need to embrace online and landlords are stuck in the old-fashioned world of dealing with their tenants, so they need to adapt otherwise they will find themselves with more empty shops.”

Chamber of Commerce and Industry Queensland policy council chairman Brett Moller said bringing balance to lease negotiations such as flexible rent review would be good for business and Cairns’ economy.

“It’s a snowballing effect, empty shops impact on confidence in shopping centres and the CBD and where that can be addressed with balance and legislation is something that the Government needs to look at,” he said.

Mt Sheridan Plaza manager Angela Liversage said the centre would support changes to reduce burden on their tenants but it was vital all stakeholders were consulted.

“Any changes which reduce the burden of regulation on any business has to be a move forward, however with the Retail Shop Leases Act 1994 it is imperative to involve all interested parties including tenants, landlords and any other leasing groups to reach a common goal,” she said.