Corruption shares its love around the country 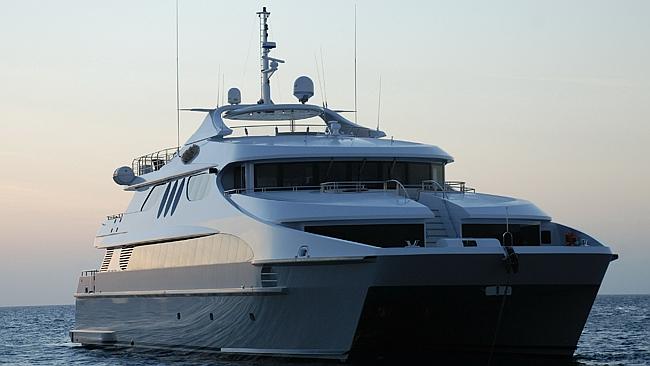 Picture: Seafaris, owned by Newcastle Mayor Jeff McCloy, went down in flames in 2013.

TTN: It is understood that the former Mayor of Newcastle NSW, Jeff McCloy, received a ‘significant payout’ for the sinking of his $12.5m luxury yacht off the coast of Cairns.

The people of Newcastle are aware that McCloy was corrupt – the Independent Commission Against Corruption found he was handing out brown paper bags of cash to multiple Liberal state MPs; he still owns one of the few big hotels in Newcastle allowed to trade unencumbered; and that hotel, and the land it sits on, will skyrocket in value as the Liberal party’s ‘transport plan’ – to cut the rail line and build an interchange right at the Lucky Hotel – comes to fruition. SORRY SIGHT: Some remains of the Seafaris have been removed from sea floor. The luxury vessel, owned by former Newcastle Mayor Jeff McCloy, sank off Cow Bay in October 2013.

BAD weather has been blamed for impeding the salvage of the former mayor of Newcastle’s luxury yacht, which sank off the Far North’s coast more than a year ago.

Only 15 per cent of the Seafaris remains about 5km offshore from Cow Bay, after a difficult salvage operation removed a majority of the burnt vessel last week.

The luxury yacht, which was the pride and joy of Jeff McCloy, burned and sank in October 2013.

Sixteen people onboard the vessel, believed to be worth $12.5 million, were forced to flee in life rafts.

They were rescued by a passing container ship.

Since then, however, the burnt remains have stayed 21m underwater. SHIP WRECK: Only 15 per cent of the Seafaris remains about 5km offshore from Cow Bay, after a difficult salvage operation removed a majority of the burnt vessel last week. PIC: SUPPLIED

Salvage operator Jason Dick, from Cairns based JD Marine Enterprises, said bad weather and the location of the wreck had hindered the already challenging operation.

“It’s the weather that’s giving us a hard time, mainly the south-easters,’’ he said.

“We’ve had a terrible year for south-easters.

“We’re three miles out off the coast in the middle of a shipping lane and you only need 10-12 knots of southeast weather and then we’re dealing with 1m swell.

“That’s been the big problem.”

Mr Dick and crew of 15 removed 85 per cent of the wreck last week, transporting it on a barge to Cairns where it has already been carted off for scrap.

“There’s another piece up there that’s that charred up, burnt and heavy that we couldn’t actually pick it up to get it on to the barge,’’ he said.

“But we’ll be heading up there shortly.”

It is understood Mr McCloy has received a significant insurance payout from the fire.

Four weeks ago, I pulled over on King Street in Newcastle. Right outside a bikie clubhouse where I watched black-hooded guys with ridiculous facial tatts wander in and out of a glass door obscured with black plastic.

It was late on a Tuesday night and I’d just dragged my tortured soul out of a Newcastle council meeting when lord mayor Jeff McCloy rang me.

Nothing unusual in that – he rings me a lot, often blowing up about someone, or something I’d written, or some lightbulb moment he’d had about fixing up the city. Not this time. We chatted for an hour before I started to think something was seriously wrong. I can’t remember everything we spoke about, although ICAC’s phone buggers could fill us all in.

Two weeks later, I found him speaking in sign language to his family and having his house ‘‘swept’’ for bugs. I asked him about the ICAC, he told me about the ICAC, I told him to buckle up, and then ICAC hell broke loose.

I’ve had my share of ‘‘heated discussions’’ with McCloy over the years, but I liked him. I’ve liked him since I stood next to him at Tomago when his multimillion-dollar floating palace crashed off the slipway and had its arse torn off by a concrete wall. The guy could have had that boat built anywhere for less, but he wanted it built in Newcastle by Newcastle hands.

Anyway, there it is: unleash the trolls and bring on the hate mail.

I liked former lord mayor John Tate, too – a man who loved Newcastle so much he put more than two decades of his life into the stupid council. Greens councillor Michael Osborne, another good pollie so passionate about his convictions that he’d chained himself to a coal train. I could name two dozen others from every political shade who do stuff because they love this city and are motivated only by their version of what it takes to make it better.

McCloy took the love too far, in a way only McCloy could do. He knows that. And I’d be among the last to defend it. But can we get some bloody perspective?

This is what we know.

McCloy, along with every other rich bloke in this town was approached by the Liberals in the run-up to the last state election and asked to kick the can.

He’s admitted to illegally giving $9975 to Tim Owen’s election campaign. He’s admitted to handing over another $10,000 to Andrew Cornwell. From his Bentley. He’s admitted to pulling about $1500 out of his wallet and giving it to Garry Edwards. And there’s another $10,000 he allegedly swung towards a Liberal bucket used to pay party staffers. He says he did it because the Labor government was in for a hiding and he didn’t want ineffective Labor MPs in Newcastle when Macquarie Street was full of Liberals.

The ICAC, after years of looking, has not found a single piece of evidence that the money bought a favour. The only reason we’re talking about it is because McCloy is a developer, and banned from writing a political cheque. Are mining companies banned? Nope. Are private health insurance and drug companies banned? Nope. Are trade unions, farming groups or government service providers? Nope. Murderers, paedophiles?

What about people who donate to the Greens? Are they buying influence or are they just trying to support the party they share a common belief with?

If you think the rail line is being cut because Jeff McCloy donated $9975 to an election campaign, then stay tuned for news of Porky Air touching down at Williamtown some time soon. Using the same logic, perhaps Save Our Rail should have scraped up $9976 and kept the damn thing open. And that donation would have been legal! In fact, so would McCloy’s if he was donating to a federal candidate and not a state one.

Sure, McCloy has CBD property that might rise in value if, heaven forbid, developers can stop the city flatlining and keep investing in its future. They’ve managed to get a pulse back over the past two years.

What we’ve learnt from the ICAC is that some, Nathan Tinkler among them, wanted something for their money.

No one else wanted a coal loader or a mining licence. Could it really be that McCloy just wanted a government that sang a similar tune to his own, without any favours? Of course it is. If 30-odd grand was going to buy me a $1.7 billion port lease, three city high rises, a tract of harbourfront rail land and a light rail line down Hunter Street then I’d have done it myself.

McCloy was a developer for 40 years before he ran for council. The city knew that when a majority backed him. Please don’t tell me we shouldn’t have a developer as mayor. It’s as stupid as saying we shouldn’t have a Green mayor because a tender for solar panels might be compromised or our rates might bankroll mud huts and windmills and tofu cafes.

Let’s get real. Whether he knew what he was doing or not, McCloy broke the law. He had to go and he did, eventually. But at this stage, not even the ICAC says he bribed anyone.

When you wake up tomorrow, the rail line will still be going, the light rail still coming, the port lease proceeding, and the GPT high rise going ahead. Those things had nothing to do with McCloy.

When you look at the council’s bottom line and when you walk around a city returning to life, you might wonder if there is in fact a McCloy legacy. You might not, but you shouldn’t question his motivations.

McCloy is many things. He’s part eccentric, part arrogant, a big part generous, a big part passionate, even part politically stupid. Despite all the bling, the Bentley and the hysteria created by his opponents, count me among those who knew he just had the courage of his convictions and the money to make them stand out a bit more than the rest of us.

Below: Jeff McCloy celebrates his birthday at The Lucky Hotel, which he owns, with a cake shaped like the bags of cash he handed to state government Members of Parliament. 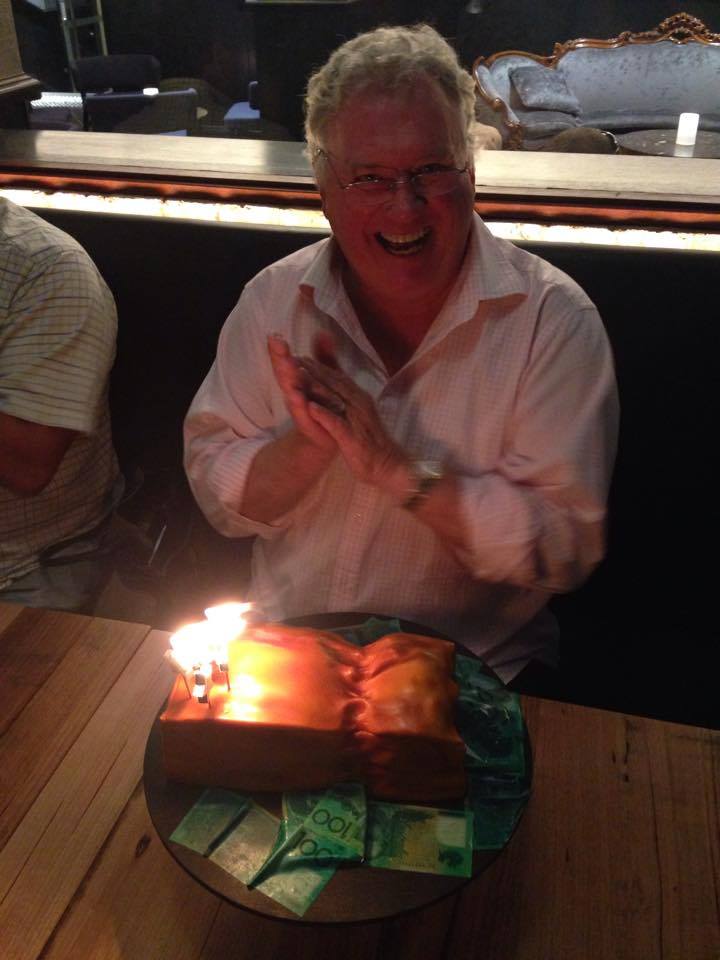 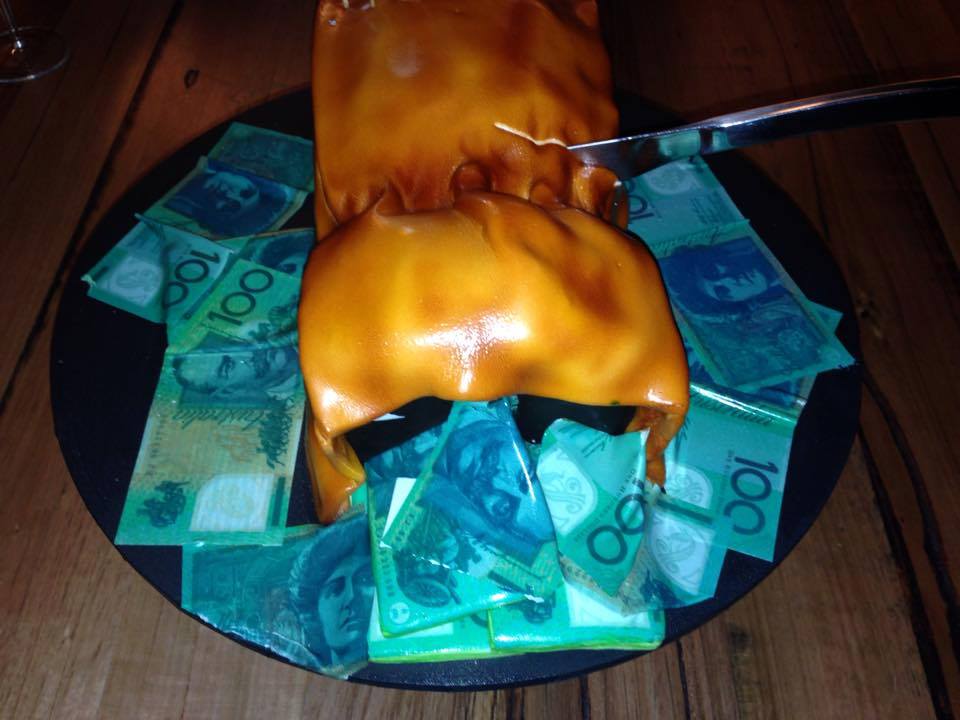