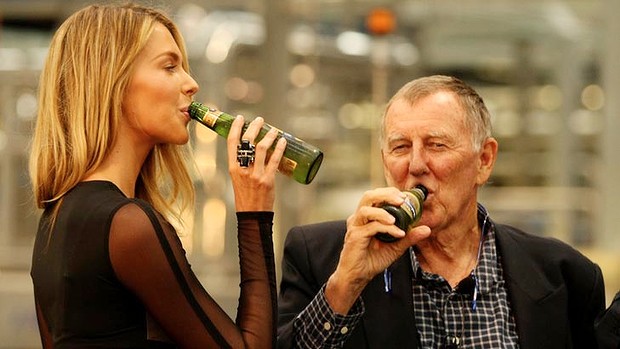 Picture: Jennifer Hawkins and John Singleton at the launch of Blue Tongue in 2010.

It was the brew that Singo built, but the Bluetongue beer brand that John Singleton so successfully marketed across the country has been killed off by global giant SABMiller.

With it has gone the $120 million brewery at Warnervale in the Central Coast of NSW – the second-biggest brewery in the state, and one that was opened in only 2010.

On Thursday morning, 64 staff were told by Carlton and United Breweries they would lose their jobs by the end of the year and the equipment at the old Bluetongue brewery would be moved to CUB’s Yatala brewery in Queensland.

Devastated staff were sent home for the afternoon and offered counselling by the company. A spokesman for CUB blamed “overcapacity’’ for the closure.

The announcement also brought to an end to one of Singleton’s successful marketing forays.

Bluetongue was founded by four Hunter Valley businessmen – Philip Hele, Bruce Tyrrell, Ian Burford and Paul Hannan – back in 2001. They sold a half stake to Singleton in 2005 and the adman quickly put his marketing touch on the brand.

Within five years the beer had gone from a boutique brand to one sold in every state of Australia, with a brand new 50 million litre a year brewery and available in more than 5700 bottle shops and on tap in nearly 400 pubs.

“In less than five years we had a beer that was bigger than Cascade,’’ Singleton said.

“The biggest problem was had was making enough of the stuff. It grew much faster than we thought.”

Singleton and his partners cashed in just before 2007, selling Bluetongue to Pacific Beverages, a joint venture between SABMiller and Coca-Cola Amatil, for a price estimated at $30 million.

“We have been looking for a local premium beer brand for some time, and we couldn’t have found anything more authentically Australian than Bluetongue,” CCA chief executive Terry Davis said at the time.

Now that beer brand is the latest victim of global consolidation in the beer industry.

Singleton has often railed against the new owners, claiming his beer was left to wither. By last year it was available in only some parts of NSW. Singleton complained it was harder to get his beer than a can of KB and offered to buy the brand back.

“I offered to buy it off them, take it off their hands, but they weren’t interested,” he said.

“Just to think, this mob [SABMiller] has taken a brand that was a bigger seller than Cascade to absolutely nothing in little over a year. A remarkable effort.

“It’s a sad day though, and not just for those who built the brand. It’s a sad day for the Central Coast. The area is already doing it tough enough without yet another business shutting down.”

A SABMiller company review found it had too many breweries across the country. Something had to give, and on Thursday morning it was the Warnervale plant, and Bluetongue.

A CUB spokesman said: “Things have changed significantly since the site was built. Warnervale is now part of the much larger and established national CUB network and this has resulted in excess brewing capacity, particularly as the overall beer market remains challenging.

“This decision has an impact on the Bluetongue brand, which will be phased out and discontinued over the coming months. The brand was important to Pacific Beverages but has been in decline over recent years. CUB has a well-established set of core beer brands and was not in a position to continue to invest in the brand.’’