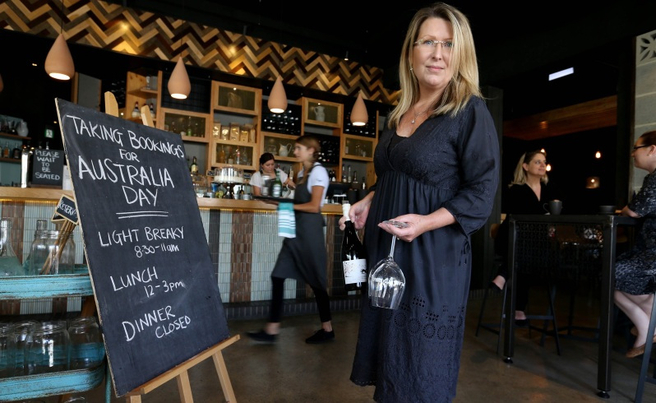 A local restaurant owner wants a Federal inquiry into workplace relations to end penalty rates that will cost her an extra $900 in wages to open on Australia Day.

Jacki O’Hara, general manager of The Peasant’s Table in Mt Hawthorn, said she would struggle to break even when she opened for breakfast and lunch on Monday.

She said she would do it as a service to her loyal customers, but would close at 5pm before the usual dinner trade because it would cost her too much money to stay open.

Ms O’Hara said penalty rates – almost $50 an hour for her staff – were outdated in the era of fly-in, fly-out and shift work.

She urged the Australian Productivity Commission to consider the impact of weekend and public holiday penalties on small-business owners in its workplace review.

A discussion paper also raises the prospect of reducing weekend and other penalty rates, potentially replacing them with time off in lieu.

But Ms O’Hara believes a flat rate around the clock would be easier to administer and for operations.

“As a business owner, you can’t just open and close when you think you will make money, because you provide a service to your customers,” she said.

“I will be happy if I break even on Monday. Last year, trade was dead on Australia Day.”

UnionsWA has said it will fight to maintain penalty rates while Colin Barnett said they should be maintained but made “more realistic”.

“I support penalty rates,” the Premier said. “If people are working at night or over weekends, they should be paid more on an hourly basis, but that should be fair.

“When you get penalty rates that are up to three times the normal hourly rate, that is stopping employment in the hospitality and tourism industries,” Mr Barnett said.

“We are losing jobs we would otherwise have, and I think it’s unfair to those other people who maybe work Monday to Friday in normal hours.”

He said the review would be closely watched by the State Government. It is considering changing awards for unincorporated small businesses, which remain in the State industrial relations jurisdiction.

“Every long weekend owners of hotels, pubs, small bars and restaurants are faced with a decision to open or not due to out-dated penalty rates which raise costs for consumers,” he said.

Penalty rates, minimum wage: all bets are off

Penalty rates, the minimum wage and the workplace flexibility of 11.5 million Australian workers will come under the microscope in a sweeping review of the industrial relations system.

In an interview to mark the launch of five issues papers that set out the key areas the inquiry will put under the microscope, Productivity Commission chief Peter Harris has promised the review of Australia’s workplace laws will “bust myths” in the broadest review of IR laws in a generation.

The long-awaited review of Australia’s workplace laws will examine the effect of the minimum wage on employment, how penalty rates are set and what economic effect the loadings have on business and employees.

The issues papers were accidentally published online on Thursday.

The review was meant to be published on the Commission’s website at midnight but went live on the homepage on Thursday morning and was seized on by at least two Labor MPs who tweeted a link to it and broke the embargo.

Enterprise bargaining, individual agreements between employers and employees, unfair dismissal, anti-bullying laws and public sector employment issues will all be examined too.

The release of the papers re-ignited political debate about workplace reform, with Employment Minister Eric Abetz pledging to Fairfax Media the government would not attempt to legislate any of the commission’s recommendations before the next election.

“The only people who have anything to fear from this inquiry are those who know deep in their hearts that they don’t have robust evidence to put before the commission,” he said.

“This is a review that we are not committed to accepting and if we do accept them [recommendations], they will be in our policies in the 2016 election.”

Senator Abetz said the government would not alter the “basic fundamentals” of the IR system, such as an independent umpire setting the minimum wage and penalty rates.

Mr Harris stressed the “human dimension” of the labour market would be considered by the economically dry commission and that “no nation aspires to be a low-wage economy. This is not a review aimed at cutting wages or removing conditions.”

Mr Harris predicted lots of submissions from employer groups calling for more flexibility but that “we’ll be considering this from the perspective that almost all of us have a stake in this system, those of us aged between 15 and 64, roughly speaking, either want to participate in the system and are training to do so or are participating in the system.”

The review, a pre-election promise from Prime Minister Tony Abbott, is launched against a backdrop of a push from the backbench and business groups for cuts to penalty rates and greater workplace “flexibility”.

The paper states that the inquiry is not “intended to maximise the benefits to any particular group” and that the commission will consider the social and economic aspects of the workplace system.

The paper notes Australia has a high minimum wage rate relative to median earnings when compared to other OECD countries  – though this is declining. The current minimum wage in Australia is about $33,000 a year, or $16.87 an hour.

On penalty rates, the paper notes that “there are polarised views about the appropriateness of weekend penalty rates in some sectors”.

Submissions are invited on how penalty rates are determined, what changes could be made to the system and on whether wages would fall if penalty rates were deregulated.

The situation in the UK, New Zealand and the US, where penalty rates are generally not required on the weekend, are also to be taken into account by the review.

Labor employment spokesman Brendan O’Connor said that WorkChoices was “merely sedated, not cremated as the Prime Minister had promised. Well, the sedative has worn off”.

“The last ‘review’ that examined workplace laws was the Abbott government’s Commission of Audit and that recommended a reduction of the minimum wage by 1 per cent a year for a decade in real terms.”

However, Senator Abetz pointed out the Coalition had rejected that recommendation.

ACTU President Ged Kearney said the review was a tool for the government to pursue its “obsession” with penalty rates and individual contracts.

But the Business Council’s Jennifer Westacott welcomed the review as a chance to “rethink how we work and how we stay competitive to succeed in a global economy”.

The release of the Productivity Commission’s five issues papers on workplace reform signals the belated firing of the starting gun on debate about industrial relations in 2015.

And while the commission’s accidental publication of the papers online more than a dozen hours before the embargo was to be lifted typifies the Abbott government’s current Murphy’s Law run of luck, the battlelines have been drawn for debate about fairness and industrial relations reform.

The much-delayed review presents opportunities and dangers to the Abbott government.

Business, a core constituency of the Coalition, was disappointed with the limited scope of the government’s first-term industrial relations agenda. It has pinned its hopes on more ambition in the second term.

The scope of the commission review is broad: penalty rates, the minimum wage, workplace flexibility, the enterprise bargaining system, the use of individual agreements between employers and employees, unfair dismissal and anti-bullying laws and public sector employment issues will all be examined.

A significant cohort of economically dry backbench Liberal MPs will be hoping the similarly dry commission recommends business-friendly changes, such as a relaxing penalty rates requirements on weekends and perhaps in regional areas.

But Abbott and his Employment Minister Eric Abetz – who said last year he had neutralised the prospect of a joint Labor/union “return to Workchoices” scare campaign – are aware of the political dangersthe review poses.

The commission’s chairman, Peter Harris, is aware of its reputation as an economically dry body and emphasises he understands the “human” dimension of laws that govern how 11.5 million or so Australians work. But it’s likely the commission will recommend at least some business-friendly changes.

Abbott, Abetz and company will not attempt to implement any changes recommended by the review until the next election campaign. They will be bracing for another political campaign from the left that raises the spectre of Workchoices even as they mull what to do heading into the election  due in 2016.

Doing nothing is not an option for the Coalition. But the path to further workplace reform is littered with landmines and the government knows it will need to tread carefully.