Choice Australia on a ticketing warpath 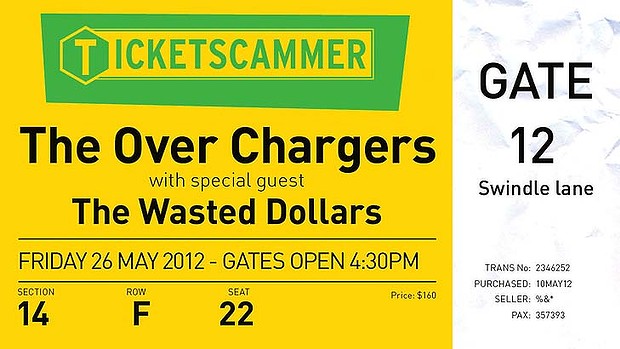 So, you’ve decided this weekend to see the Sydney Festival’s baroque show-stopper Dido & Aeneas; choreographer Sasha Waltz’s underwater spectacular set to Purcell’s 17th-century opera at the Lyric Theatre. How deep are your pockets?

Those attending concerts, arts and music festivals, sports and theatre around the country are charged up to $9.15 on top of already expensive tickets no matter which option they use to buy them – phone or internet; home delivery or pick-up. Sometimes there is a fee even for buying online and printing at home. So what are you paying for?

Most of this money is going directly to the festival organisers or to the venue, or is split with the ticketing agency if selling is outsourced. The usual culprits – credit-card charges – account for little of booking fees. The Reserve Bank of Australia estimated in September the average merchant service fee for MasterCard and Visa is 0.81 per cent of the transaction.

On the Sydney Festival website, the general ”how to book” and ”ticketing fine print” pages state ”transaction fees may apply” without stating amounts. The Dido & Aeneas page gives the price range of seats, with no mention of extra fees.

Choose a cheap ”restricted view” seat, select a date and you’re told $55 is the ”full price”. But, after selecting the number of tickets, the truth is revealed: ”a transaction fee of $6.50 will be applied to this booking”, a 12 per cent mark-up on a $55 ticket, but the same flat fee is charged to those buying $199 premium seat tickets.

A Sydney Festival spokeswoman said no one was available to explain where the booking or handling fee money goes. However, she pointed out it was possible to avoid ticket fees by buying the small number of $25 bargain tickets made available for many shows each day at the Tix 4 Nix booth in the Hyde Park festival garden.

Ticketing agencies are often the only option when a big concert name tours. Tickets for the Rolling Stones at Allphones Arena on March 25 are $99 to $577.70. But the Ticketek website says in fine print below the event you will also be up for a ”service/delivery” fee ”from $5.35 per transaction” – and the additional 1.95 per cent ”credit/debit card processing fee”.

The Sydney Opera House adds an $8.50 fee per phone, internet or email transaction, or $5 at the box office. A spokeswoman said that, as a non-profit organisation, the Opera House must generate 85 per cent of operating costs independently of government.

Such surcharges are ”standard practice worldwide”, she said, and ”cover the costs of running a ticketing operation – this includes a call centre, website, box office counters, back office operations, sales and marketing and significant technology development and infrastructure”.

But Choice spokesman Tom Godfrey said such surcharges are excessive and the price of a show ticket should already include the cost of providing the ticketing service.

”Sure, the Opera House needs to make some money but it shouldn’t be doing it at the expense of the consumers’ interest,” Godfrey says. ”Surcharges should not be over and above what it costs to administer the service.”

The Australian Competition and Consumer Commission, which declines to disclose how many complaints it has received about booking fees, says while businesses are free to set their prices, it is investigating whether there is adequate disclosure of fees and charges, with concerns noted about the entertainment industry.

”The practice of incremental disclosure of additional fees and charges – often referred to as drip pricing – is a key focus,” an ACCC spokeswoman said.

Godfrey says ticket buyers should be quoted the full price.

A Ticketmaster spokeswoman said only the managing director could comment and was overseas.

Ticketek did not respond to Fairfax Media’s request for comment before deadline.

As of March 18 last year, the Reserve Bank introduced new rules allowing credit-card companies to cap retailers’ credit-card surcharges closer to what the companies actually charge as a merchant service fee. But, in Australia, there is no regulatory body overseeing the setting of ticket prices or pricing structure.

At Sydney Theatre Company, patrons pay $7.50 per online transaction and $8 over the phone but there is no extra charge on tickets sold over the counter.

”Transaction fees go to the costs associated with running and maintaining a box office,” a Sydney Theatre Company spokesman said. ”And yes, STC does need to pay credit-card companies a merchant fee, which is calculated against the gross cost of the transaction.”

Choice has noted smaller ticketing agencies, such as Moshtix, charge a few dollars less for online and phone bookings than the Ticketmaster-Ticketek duopoly.